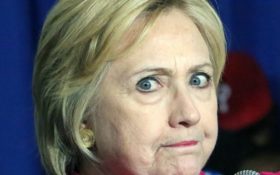 Critics of former Secretary of State Hillary Clinton – including President-elect Donald Trump – regularly accused her campaign of attempting to rig the 2016 presidential election.

Although largely ignored by the mainstream media, the evidence of election wrongdoing was disturbing.

Throughout the year, The Horn News reported on multiple instances of vote swapping, conspiracies to commit electioneering, pictures of equipment tampering, reports of dead voters, engineered debates, DNC manipulation, widespread voter fraud, illegal coordination and sabotage, altered primaries, unethical media influence, and a flat out rigged Democratic primary that was so blatant, one Stanford research paper suggested that the odds that Clinton did NOT commit widespread fraud to be 1 in 77 billion.

And she’s not done yet.

Even after the stunning rejecting of the Clinton crime family by the American people at the polling booth, Hillary’s team has shifted their tactics – and are frantically working directly with the rogue Electoral College voters that call themselves the “Hamilton Electors” to overturn the results.

“Advocates of the long-shot bid to turn the Electoral College against Donald Trump have been in contact with close allies of Hillary Clinton, according to multiple sources familiar with the discussions,” POLITICO reported Monday.

Recruit “Never Trump” Republican electoral voters to choose Ohio Gov. John Kasich over Trump, denying him the neccessary majority needed to be elected, and instead move the issue to the House of Representatives to decide the next president of the United States — where Clinton has greater widespread support among establishment politicians.

“All 538 members of the Electoral College will meet on Dec. 19 in their respective state capitals to cast the formal vote for president. Trump won the popular vote in states that constitute 306 electors — easily above the 270-vote threshold he needs to become president if all Republican electors support him,” according to POLITICO. “That’s why anti-Trump electors are working to persuade at least 37 Republican electors to ditch Trump, the minimum they’d need to prevent his election, and join them in support of a compromise candidate, which could send the final decision to the House of Representatives. Clinton won the popular vote in states that include a total of 232 electors.”

And with thirteen days to go, the effort is gaining steam. At least one Republican member of the Electoral College said Monday he’s on board.

Dallas paramedic Chris Suprun previously indicated he would support Trump, but according to The Associated Press he now says he will refuse to elect Trump.

“I’m expecting backlash, but that has been par for the course this campaign. People are unhappy. They’re angry. But I’m angry, too,” said Suprun, who said that prior to changing his mind he had received hundreds of emails, letters and phone calls urging him not to support Trump.

Other electors are reporting receiving death threats by Clinton backers against them and their families.

In the face of such pressure, another Texas Republican elector, Art Sisneros, resigned last week rather than vote for Trump. Suprun said he was not resigning but also won’t be voting for Hillary Clinton.

“I am not sure of who I will vote for, but would have to strongly consider someone like (Ohio Gov. John) Kasich who has both executive and legislative experience bringing people together,” he said.

Texas law doesn’t mandate that electors vote according to the results of the state’s presidential election, which Trump won by nine percentage points over Hillary Clinton. Suprun and the GOP’s other electors signed pledges at the state Republican convention in Dallas this summer promising to vote for their party’s nominee, but those aren’t legally binding.