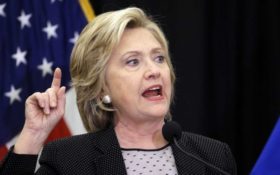 Think the election is over, the votes have been tallied, and President-elect Donald Trump’s challenge by former Secretary of State Hillary Clinton is over?

For Hillary supporters, the fight isn’t over.

They’re desperately working behind the scenes in “what can only be described as a coup attempt,” according to The Observer  — and these Hillary backers are so devoted to the cause, they’re threatening death to anyone who gets in their way.

All across the country, campaigns have sprung up around the country to try to persuade members of the Electoral College to do something that has never been done in American history — deny the presidency to the clear Election Day winner.

Republican Party officials in Georgia, Idaho, Texas, and Michigan said their electors also have been bombarded with messages, and Arizona officials reported many of the messages were “hateful.”

“Now all the electors are starting to get beaten down. There are some electors who have been threatened with harm or with death,” local Dallas-Fort Worth station NBCDw reported.

Activists are circulating online petitions and using social media and threatening phone calls in hopes of influencing Republican electors to cast their ballots for someone other than President-elect Donald Trump and deprive him of the 270 Electoral College votes needed to become the next occupant of the White House.

A record number of ‘faithless electors’ – Electoral College voters that refuse to cast their legally required ballot for their candidate – are expected.

“At least a half-dozen Democratic electors have signed onto an attempt to block Donald Trump from winning an Electoral College majority, an effort designed not only to deny Trump the presidency but also to undermine the legitimacy of the institution,” according to POLITICO.

They’ve even flipped at least one Republican electoral votes. Texas Republican Art Sisneros says he has reservations about the president-elect, and told The Associated Press he won’t vote for Trump despite being required to.

“As a Christian, I came to the conclusion that Mr. Trump is not biblically qualified for that office,” he said.

Sisneros signed a state party pledge to support the GOP’s standard-bearer, but that was before Trump was the official nominee.

Electors are chosen by party officials and are typically the party’s most loyal members. Presidential electors are not required to vote for a particular candidate under the Constitution. Even so, throughout American history more than 99 percent of electors have voted as pledged throughout the nation’s history.

Some state laws call for fines against “faithless electors,” while others open them to possible felony charges, although the National Archives says no elector has ever been prosecuted for failing to vote as pledged. In North Carolina, a faithless elector’s vote is canceled, and he or she must immediately resign and be replaced.

“Democratic elector Polly Baca… said the Electoral College should be returned to its original conception — as laid out by Alexander Hamilton in the Federalist Papers — as a deliberative body able to exercise free choice while using popular votes only as a guide,” POLITICO reported.

This isn’t fringe leftists, either. “A growing number of academics and activists are calling for US authorities to fully audit or recount the 2016 presidential election vote in key battleground states, in case the results could have been skewed by foreign hackers,” according to The Guardian.