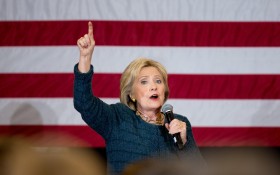 It’s an accusation supporters of Clinton’s rival presidential candidate Bernie Sanders have been making for months, and the claim that has caught the eye of academics.

“A document leaked by a hacker who took responsibility for the Democratic National Committee data breach appears to show the DNC coordinating with Hillary Clinton from the start of the presidential campaign — just as Bernie Sanders has claimed,” The New York Post reported Thursday.

According to US Uncut, the document indicates the “DNC was diligently cleaning up Clinton’s record, using ‘specific hits to muddy the waters around ethics, transparency, and campaign finance attacks on HRC.”

HRC is a commonly used abbreviation for Hillary Rodham Clinton.

“The document to the DNC dated May 26, 2015 — a month after Sanders kicked off his presidential bid — declared that ‘our goals & strategy’ are to ‘provide a contrast between the GOP field and HRC,’” The New York Post reported.

In other words, the leaked document shows the DNC was actively working to get Clinton elected, while ignoring her rivals like Sanders and former Maryland Governor Martin O’Malley.

In the document’s “Reporter Outreach” section, the paper reads: “Working through the DNC and others, we should use background briefings, prep with reporters for interviews with GOP candidates, off-the-record conversations and oppo pitches to help pitch stories with no fingerprints and utilize reporters to drive a message.”

DNC was pushing HRC as candidate from May, 2015 of last year. #Guccifer2 pic.twitter.com/0rJcTspOvl

The leaked document, if verified as authentic, would provide credibility to multiple election fraud accusations made towards the Clinton campaign in recent months.

“Beginning in Iowa and climaxing with the holy mess that occurred in Arizona, the Democratic presidential primaries have been a Wagnerian Ring Cycle of electoral ‘shenanigans,’ cynical rule-bending and outright voter suppression,” The Huffington Post reported in March of this year. “The DNC has relied upon its favorite scapegoats (benign incompetence, and of course, Republicans) to explain away the convenient ‘mishaps’ and anomalies that have consistently favored Clinton as she elbows her way to the Democratic coronation ceremony in Philadelphia.”

Adding more credibility to this accusation of widespread Democratic primary election fraud is a recent paper out of Stanford University, where two graduate students from the prestigious school declared that election fraud may have swung the election for Clinton.

“First, we show that it is possible to detect irregularities in the 2016 Democratic Primaries by comparing the states that have hard paper evidence of all the placed votes to states that do not have this hard paper evidence. Second, we compare the final results in 2016 to the discrepant exit polls. Furthermore, we show that no such irregularities occurred in the 2008 competitive election cycle involving Secretary Clinton against President Obama,” the paper reads.

“As such, we find that in states wherein voting fraud has the highest potential to occur, systematic efforts may have taken place to provide Secretary Clinton with an exaggerated margin of support.”

Since the stunning reveal, the DNC and mainstream media have remained mute on the situation — and it’s infuriating some Sanders supporters.