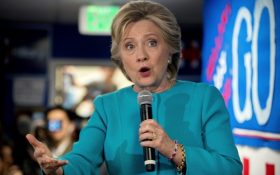 Even Democratic presidential candidate Hillary Clinton’s strongest supporters will admit it: She’s a terrible speaker when she’s forced to talk off the cuff.

So to prepare for the string of debates she’s had to participate in this year, wouldn’t it be great to know the questions beforehand?

That’s exactly what happened, according to Republican presidential candidate Donald Trump and recently leaked emails the Democrats are still struggling to explain.

Why didn't Hillary Clinton announce that she was inappropriately given the debate questions – she secretly used them! Crooked Hillary.

A big shot Democrat party boss was BUSTED this week by an email released by WikiLeaks, which apparently shows the Clinton insider getting debate questions beforehand and feeding questions to Clinton.

Donna Brazile, a Clinton ally and current head of the Democratic National Committee, was a CNN commentator throughout the primary season – and in a March email released online by WikiLeaks, she made a highly unusual boast.

“From time to time I get the questions in advance,” she wrote in an email to Clinton campaign chairman John Podesta, and included a question about the death penalty.

Naturally, the leftist media is in full-blown cover-up mode.

After Trump made the accusation, MSNBC host Andrea Mitchell claimed that the idea of Brazile giving questions to Clinton had been “completely knocked down.”

Nice try, but no cigar.

Brazile claimed she was referring to a question she would receive during a TV appearance the next day, according to The Daily Caller – but the website reports that none of those spots involved a discussion of the death penalty.

One place DID have that discussion, though – a place where a very similar question was asked: a CNN town hall with Clinton and Bernie Sanders held the next day!

The revelation is vindication for Trump supporters, who have suspected the presidential moderators and debate system has a clear bias from the beginning.

And unlike MSNBC’s Mitchell, Megyn Kelly of Fox News wasn’t having it. She asked something simple, basic and fair: “How did you get that question, Donna?”

Instead of answering… or even apologizing… Brazile launched into one of the most bizarre rants of the campaign season.

“As a Christian woman I understand persecution, but I will not sit here and be persecuted because your information is totally false,” she exclaimed. “You’re like a thief that wants to bring into the night the things you found that was in his gutter.”

She ranted about “doctored” emails, claimed it wasn’t “verified” and was still “under investigation.”

Then, when she was out of ammunition, she fired off what has become the Democrat’s favorite shot.

“Go to Russia!” she told Kelly.

Ironically, Brazile was brought in to take control over the DNC when the former party boss, Debbie Wasserman Schultz, was forced to quit in shame after another set of leaked emails revealed that she helped rig the primaries for Clinton.

Brazile was supposed to restore fairness to the party after that massive scandal.

Once again, however, it looks like there is nothing less democratic… than the Democratic Party.