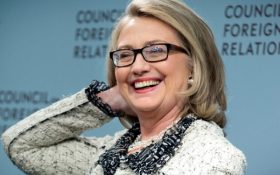 The Hillary Clinton campaign emails released by WikiLeaks Monday are the most alarming yet – and they’ve revealed what supporters of Vermont Sen. Bernie Sanders long believed.

An email from top Democratic party lobbyist Erick Mullen to Clinton campaign Chairman John Podesta in 2015 has revealed that Clinton orchestrated a Democratic coup to install Debbie Wasserman-Schultz to the head of the Democratic National Committee – all the way back in 2011.

In order for Clinton to get Wasserman-Schultz, the co-chairwoman of her failed 2008 presidential campaign, to the head of the Democratic National Committee, she needed to get the then-chair to step down… and also recommend Wassernman-Shultz.

When Kaine resigned in 2011, he pushed President Barack Obama to appoint Wasserman-Shultz as his successor.

Why? Turns out, Clinton had already promised him the vice presidency as payment for his cooperation.

In the revealing 2015 email, Mullen complains of the “unseemly” way political insider Bob Glennon was bragging to Sens. Sherrod Brown and Heidi Heitcamp about Clinton’s underhanded plan at a dinner.

Sponsored: Did you know you can actually starve cancer cells to death?

Busted… but not before the move did the trick. Thoughout the highly controversial Democratic primary, Sanders supporters accused Wasserman-Schultz of rigging the process against them. The evidence was so damning, at the end she was forced to resign as DNC head.

By then, Clinton had won the Democratic presidential nomination. As thanks, Clinton quickly hired Wasserman-Shultz to her campaign – and then nominated Kaine as her vice president.

You scratch Clinton’s back, she’ll scratch yours.

Americans who have so proudly admitted, “I’m With Her” don’t have any idea who she truly is.

Clinton has successfully fooled the American public, despite opponents saying she doesn’t have a genuine bone in her body. And every single statement, stance, and even emotion was calculated by her desire for the White House… and no matter what Democratic voters wanted, she was going to make sure they had to pick her.

It doesn’t end there. The recently released documents show that Clinton admitted to having separate public and private opinions on major issues.

The leak that followed Monday exposes exactly how those opinions differ, and the dishonesty is shocking.

The emails reveal that Clinton’s public opinion is whatever her staff tells her is the best way to seize the White House.

Although he was chastised by the media for it, Republican nominee Donald Trump was completely right about Clinton “playing the woman card.” Her staff was discussing it’s power to manipulate voters before Clinton had even publicly announced her candidacy.

In March of 2014, Robby Mook, who was later named her campaign manager, wrote that “gender will be a big field and volunteer motivator, but it won’t close the deal.”

Her staffers also decided how much emotion and outrage she should show at the Benghazi hearing. Her massive mistakes, which cost the lives of four American heroes, became another political ploy that her staff worked tirelessly for years to twist to her benefit.

In deciding whether to back the reinstatement of the 1993 Glass-Steagall Act, that separated commercial and investment banking, her team discussed if it would cost them the coveted endorsement of Elizabeth Warren. So they disregarded the rule of the law, and focused solely on the potential loss of an endorsement and the effects on the Clinton campaign.

Everything neat and in put into place YEARS ago by the Clinton campaign – All these backroom deals and shady conspiracies just to seize power.

And she could be just a month from getting away with it.

Once Clinton is sitting in the Oval Office, and voters no longer possess the ability to decide her fate, there’s only one thing her past can make us certain of – Clinton will do whatever it takes to STAY in power.