The man of the year is… - The Horn News 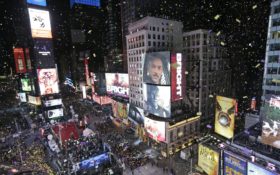 America is truly the most blessed nation on earth. A national treasure of talent, drive, dedication, and common sense lies in the heart of every American. It’s that patriotism that makes America a better place to live. So many have contributed to the country’s success that it’s hard to pick just one person to be our Man of the Year.

We’ll start off with two honorable mentions: First, Tucker Carlson, who spent most of the year hosting Fox News Channel’s top-rated show. Carlson talks about the border, the fentanyl crisis, urban crime, and the pressures facing the average American every night while the slick-talking heads on other networks bob and weave around the truth. He’ll continue to be an influential voice for years to come.

Second, Virginia Gov. Glenn Youngkin, who came off a shocking victory in November 2021 to deliver on the agenda he promised his state’s voters.

There are so many great candidates that this year, we had to award the title of “Man of the Year” to two people: Florida Governor Ron DeSantis and President Donald Trump.

There’s no doubt that Florida Gov. Ron DeSantis has had the most successful year of any politician in America. The popular Republican breezed to re-election this November, crushing his Democratic opponent in deep-blue parts of the state like Miami that had not voted for a Republican candidate for statewide office in decades.

His victory blanketed the entire state and every group of people in the former toss-up state, including Hispanic voters, whom Democrats thought they could take for granted.

Why wouldn’t he be popular? He presides over one of the fastest-growing states, one of the few that opened early from COVID-19. The economy is booming.

The governor’s landslide win has already inspired talk of a 2024 presidential run—a race he just might win.

DeSantis would lead Trump by 11 points in Iowa and 15 points in New Hampshire in a head-to-head match, according to a WPA Intelligence poll released in November.

“He is never going to be better positioned than right after his smashing reelection victory,” wrote Kurt Schlichter of RedState.com. “He will have the momentum, he will have the excitement, and he will have the bully pulpit as governor of America’s most vibrant state.”

He’s also gotten the good news that his beloved wife, Florida First Lady Casey DeSantis, beat breast cancer in October. Her health may be less of a concern for the 44-year-old governor in 2024.

All these factors have Democrats shaking in their boots—and trying to tar him with a national scandal. The Biden administration’s Treasury Department’s Office of the Inspector General opened an investigation into DeSantis in October to see whether he used any federal funds to help transport illegal aliens from Florida to blue states.

When the other side singles you out for abuse, that’s a sign of success—which explains our second choice for Man of the Year….

At first blush, President Donald Trump seems like an odd choice for man of the year this cycle. He faces a string of political investigations, his presidential announcement didn’t go as well as he had hoped, and he flubbed a number of important political endorsements in the 2022 midterms.

Trump’s overall endorsement record in 2022 was about 50-50… not perfect but also not the “kiss of death” alleged by Sen. Mitt Romney, R-Utah.

It’s true that DeSantis leads Trump in a few polls, but most show the former president clearing the 2024 GOP field. An NPR poll showed Trump leading DeSantis by 12 percentage points… and Mike Pence by 34 points.

Trump’s Mar-a-Lago announcement did not generate the political firestorm he once did… but it got more attention than his 2015 trip down the escalator, which most people wrote off as a publicity stunt. This time, 12.5 million people tuned in, even when most networks refused to cover it live.

All this comes as prosecutors in New York state single out the Trump Organization for criminal charges, Fox News has squeezed him off the airwaves, former Republican allies turn their backs on him, he’s still banned from many social media outlets (but not Twitter), Democrats in the House of Representatives plan to release his personal tax returns. and even conservative judicial analysts believe Trump will be indicted before 2024.

Why does a record like that earn Trump co-honors as man of the year?

The Left perfected the “politics of personal destruction”—and they only use them against people who scare them the most. Both Donald Trump and Ron DeSantis have been targeted for this treatment.

Someone who can be as strong as he is when he’s under attack will only grow in the years to come.

Imagine how far Trump’s “America First” message could spread if he had any of the advantages typical candidates enjoy?

Imagine what happens when Fox relents, and he appears on TV to fire back at Democratic witch hunts.

Imagine what happens when his side starts pushing back against Nancy Pelosi’s dirty tricks and invasions of privacy.

Imagine what happens when he starts touring massive stadiums, telling tens of thousands of people how he plans to Make America Great Again after four years of Joe Biden’s failures.

One thing is certain: A year under either President Trump or President DeSantis would be much better for every writer, and every American, to look back on than the last year under President Biden.

Hats off to both men.