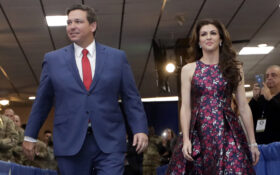 Florida First Lady Casey DeSantis has beaten her breast cancer, and she and Gov. Ron DeSantis celebrated in a new campaign ad released this week.

The first lady’s diagnosis was made public last October. The governor said she finished chemotherapy treatments in January, calling it a “big milestone.”

“She’s doing well and we look forward to having good news over the ensuing weeks and months,” the Republican governor said at the time.

The procedure worked, the couple announced in an ad campaign this week.

“If you want to know who Ron DeSantis really is, when I was diagnosed with cancer, and I was facing the battle for my life, he was the dad who took care of my children when I couldn’t,” Casey DeSantis said.

“I get asked all the time, who is Ron DeSantis?” she said.

“He’s the kid who grew up right here in Florida working his tail off paying his own way through school and volunteering to serve in the Navy and deploying to Iraq,” Mrs. DeSantis continued. “He’s the man who I fell in love with from the moment we met.”

I love you, Casey. pic.twitter.com/HKID5TolyM

Casey DeSantis, 41, has played an active role in her husband’s administration, often appearing alongside the governor at official events.