Florida makes history by ousting all Dems - The Horn News 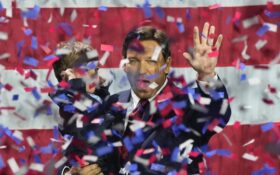 Not only did they fail to unseat the governor or one U.S. senator, but they also timed a key retirement very, very poorly.

Now, the Republicans will occupy all statewide offices in Florida next year… for the first time since the 1800s.

Since 2019, Agriculture Commissioner Nikki Fried has served as the only statewide Democrat.

However, Fried declined to run for re-election. She focused on her campaign for governor instead… and she lost the Democrats’ gubernatorial primary by 24 points.

Republican Wilton Simpson won Tuesday’s race for agriculture commissioner in a landslide: 18 points according to Associated Press reporting from Thursday.

Fried will leave office next year… and she’ll be forfeiting the Democrats’ last statewide office.

For the first time since the post-Civil War Reconstruction era, Democrats will hold NO statewide elected office in Florida!

The Democrats once dominated Florida politics.

Former President Andrew Jackson — the founder of the Democratic Party — once held a statewide office in Florida, and the Democrats reliably won most statewide elections until the 1950s.

Sure enough, the Democrats made several rash decisions in the governor’s race. Like Diaz, U.S. Rep. Charlie Crist ran for governor, and he resigned his House seat to focus on the gubernatorial campaign, only to lose by 19 points.

The Republicans also gained five seats in the state Senate, and they now control the chamber 28-12. Before the election, the Republicans controlled the statehouse 76-42, although the results remain pending in several races from Tuesday’s elections.