Judge drops bombshell: Trump to be indicted - The Horn News 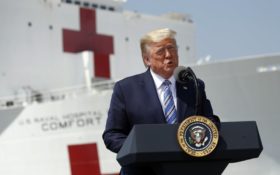 Former Fox News star Judge Napolitano has a startling prediction: It’s not a question of if, but when, former President Donald Trump will be indicted by the FBI.

Serious criminal charges are looming over Trump — he’s in “hot water” as Napolitano put it — over an FBI raid of his Florida estate in early August.

In an opinion piece for The Washington Times, Napolitano said it gives him “no joy” to write such a prediction.

But he said the facts were clear — Trump and his supporters should prepare for an indictment, which will come soon.

Even a cursory review of the redacted version of the affidavit submitted in support of the government’s application for a search warrant at the home of former President Donald Trump reveals that he will soon be indicted by a federal grand jury for three crimes: Removing and concealing national defense information (NDI), giving NDI to those not legally entitled to possess it, and obstruction of justice by failing to return NDI to those who are legally entitled to retrieve it.

Trump has claimed the documents at his residence were declassified by his administration while he was in the White House, making their possession legal — and the FBI raid unwarranted.

The former judge claimed that federal agents had anticipated such a defense, and had already worked around it.

Unbeknownst to him, the feds had anticipated such a defense and are not preparing to indict him for possessing classified materials, even though he did possess hundreds of voluntarily surrendered materials marked “top secret.” It is irrelevant if the documents were declassified, as the feds will charge crimes that do not require proof of classification. They told the federal judge who signed the search warrant that Mr. Trump still had NDI in his home. It appears they were correct.

Under the law, it doesn’t matter if the documents on which NDI is contained are classified or not, as it is simply and always criminal to have NDI in a non-federal facility, to have those without security clearances move it from one place to another, and to keep it from the feds when they are seeking it. Stated differently, the absence of classification — for whatever reason — is not a defense to the charges that are likely to be filed against Mr. Trump.

Napolitano also warned that Trump was hurting his own legal defense with his social media statements about the controversial raid.

Most Republican voters have condemned the investigation as part of a “witch hunt” against Trump and his supporters.

Napolitano said in the end, that doesn’t matter — Trump is losing, he claimed.

Yet, misreading and underestimating the feds, Mr. Trump actually did them a favor. One of the elements that they must prove for any of the three crimes is that Mr. Trump knew that he had the documents. The favor he did was admit to that when he boasted that they were no longer classified. He committed a mortal sin in the criminal defense world by denying something for which he had not been accused.

The second element that the feds must prove is that the documents actually do contain national defense information. And the third element they must prove is that Mr. Trump put these documents into the hands of those not authorized to hold them and stored them in a non-federally secured place. Intelligence community experts have already examined the documents taken from Mr. Trump’s home and are prepared to tell a jury that they contain the names of foreign agents secretly working for the U.S. This is the crown jewel of government secrets. Moreover, Mr. Trump’s Florida home is not a secure federal facility designated for the deposit of NDI.

According to Bush-era statutes, used previously to charge Edward Snowden and Julian Assange, that could lead to almost certain criminal charges, Napolitano said.

But don’t take Napolitano’s word for it.

We want to hear your opinion.

Will Trump be federally indicted? Or will his legal team turn the FBI’s case on its head?

Will Donald Trump be indicted?