New York's plan to get Trump is insane - The Horn News 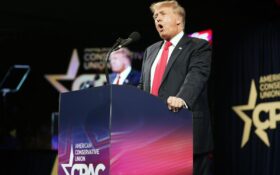 The prosecutor’s office first probed this scandal several years ago, before reaching a dead end. Then, the prosecutors shifted focus to Trump’s business practices, and they eventually charged Trump Organization CFO Allen Weisselberg, although not Donald Trump himself.

Evidently, Bragg is trying the exact same thing as Vance but expecting different results. The dream shall never die!

Bragg is apparently attempting to uncover new evidence by negotiating with Weisselberg.

Weisselberg, 75, pleaded guilty in August to tax fraud. His plea agreement requires him to testify for the prosecution in exchange for a five-month jail sentence. Weisselberg, who had been facing up to 15 years in prison, said he previously rejected an offer of one to three years in prison.

Weisselberg has already given the prosecutors some useful information about the tax fraud case. For example, Weisselberg told prosecutors that some Trump Organization executives kept their jobs even after facing accusations of tax fraud.

It remains unclear whether or not Bragg will file charges against Trump. Bragg may exercise prosecutorial discretion and choose to prioritize other cases instead. Some observers are already encouraging him to do so.

The tax fraud case is the only trial to arise from the Manhattan district attorney’s three-year investigation of Trump and his business practices.

The U.S. Justice Department is investigating Trump for both the Capitol riot and the documents at his Florida home, but those federal investigations are unrelated to these state-and-local investigations.

Bragg has faced accusations of launching a politically motivated investigation.

In other words, the district attorney’s office has been suffering from a losing streak… and they have yet to change course.