Ron DeSantis under investigation by Biden admin - The Horn News 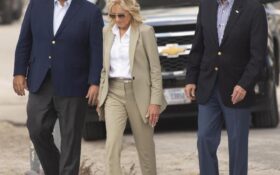 Florida Gov. Ron DeSantis has been grabbing national headlines for only a few years, but he won his first House election ten years ago.

Despite his long career, DeSantis hasn’t had any scandals.

The Office of the Inspector General at the U.S. Treasury Department just announced an investigation into DeSantis.

At issue is whether millions of dollars in interest earned on State and Local Fiscal Recovery Funds, disbursed through the CARES Act and the American Rescue Plan, was used to facilitate the transport of about 50 migrants from Texas to Massachusetts in mid-September, with a stopover in Florida on the way.

With this bus controversy, DeSantis brought national attention to illegal immigration and to the out-of-control flow of asylum seekers.

At the time, the Treasury Department spoke to DeSantis to issue guidance on how to use the funds legally.

“Regarding the SLFRF, we are seeking, from its program officials in the Department, more detailed analysis of the guidance they have issued,” the Treasury Department wrote in a letter to Sen. Ed Markey, D-Mass.

Sen. Ed Markey, D-Mass., requested the investigation, and his name appeared at the top of the department’s letter.

As far back as last month, Markey asked Biden’s administration to investigate DeSantis over the migrant buses.

Conservatives have described the investigation as yet another political ploy by Biden’s underlings.

DeSantis himself appears unfazed by the investigation.

“Reviews by Treasury are typical and, as stated by the OIG, are ‘part of its oversight responsibilities,'” Taryn Fenske, a spokesperson for DeSantis, told Politico Wednesday.

The spokesperson added that the governor’s budget office already spoke about this issue with the Biden administration “weeks ago.”

DeSantis is also facing multiple lawsuits over the bus to Martha’s Vineyard, in addition to an investigation by a Texas sheriff, but the Treasury Department’s stunt marks the first such investigation at the federal level.

The department has yet to give a timeline or to confirm an inspector general for this case.

“We plan to get this work underway as quickly as possible,” the department said in its letter.

The Horn editorial team Associated Press contributed to this article.