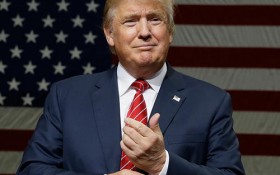 The year is coming to a close, and no one had a wilder ride than President-elect Donald J. Trump.

Here’s a look back on a year absolutely no one predicted.

No one, that is, except for The Horn News… and Trump himself!

JANUARY: Trump enters 2016 leading in most Republican polls, yet somehow dismissed as a joke by both the clueless mainstream media and a hostile GOP elite.

The National Review, long a bastion of the pseudo-intellectual right, even printed a FULL ISSUE aimed at destroying Trump.

And it almost worked…

FEBRUARY: Under assault from every direction, Trump stumbles out of the gate. Despite winning most Iowa polls, he lost the caucus – thanks in no small part to some dirty tricks by the winner, Texas Sen. Ted Cruz.

The mainstream media cranked out mocking obituaries for the Trump campaign and endless “I told you so” columns explaining why the billionaire couldn’t possibly win.

That self-congratulatory back-patting didn’t last very long. By the end of the month, Trump would be riding a wave of three straight primary wins.

MARCH: Team Clinton was openly rooting for Trump as he triumphed on the March 1 Super Tuesday primaries – dismissing him as a New York loudmouth they’d have no problem beating.

At a March meeting at Hillary Clinton’s headquarters, campaign manager Robby Mook shushed the room when Trump came on TV, according to the New York Times.

If words were truly edible, he’d eventually choke on those!

APRIL: As Trump came close to sealing the nomination, his Republican rivals resorted to a pathetic act of desperation.

Cruz and Ohio Gov. John Kasich formed a pact aimed at “letting” each other win different states in a brazen attempt to stop Trump. Under the deal, Cruz would win Indiana while Kasich would take Oregon and New Mexico.

MAY: The plan worked like a charm as Kasich and Cruz stormed to victories, ending Trump’s momentum and his quest for the presidency.

HA! Of course not – Trump handily won all three states despite the backstabbing “pact” from his fellow Republicans.

By the end of the month, Trump had the nomination all but sewn up.

JUNE: As Clinton struggled to beat Vermont Sen. Bernie Sanders – something that should’ve been an early-warning sign for her supporters – Trump was free to turn his full attention to her.

And he didn’t mince words.

In a major speech outlining his plan of attack, he called Clinton a “world class liar” who “spread death, destruction and terrorism” and “perfected the politics of profit.”

Ironically, the peaceful GOP convention stood in sharp contrast to a wreck in Philadelphia as angry Bernie Sanders supporters protested, booed, turned their backs, and in some cases walked out.

AUGUST: The leaders of Mexico figured out what the entire U.S. pundit class could not: Donald J. Trump would be the next president of the United States.

They rolled out the red carpet for Trump, who met with the president of Mexico and showed he had the chops to go toe-to-toe with any world leader.

Clinton, on the other hand, practically vanished amid reports of poor health.

SEPTEMBER: Clinton’s health problems came to a head in a very public way as she fled a 9/11 memorial and was caught on video fainting as she tried to escape.

Her infamous 2008 campaign asked who you’d want answering the phone at 3 a.m. – but the episode in New York showed she might not be ready at 3 p.m.

OCTOBER: It was supposed to be the Clinton team’s October Surprise… the release of a tape capturing the Republican candidate years ago engaged in a little embarrassing locker-room talk.

The pundits predicted – again – that this was the end for Trump.

The pundits – again – were wrong.

Despite polls showing a Clinton victory… despite the media united against him… despite having zero political experience… Trump rode a wave of dissatisfaction with business as usual right into the White House.

“We will begin the urgent task of rebuilding our nation and renewing the American dream,” he said in his victory speech. “I’ve spent my entire life and business looking at the untapped potential in projects and in people all over the world. That is now what I want to do for our country.”

DECEMBER: Trump got to work doing just that, unveiling his Cabinet and setting the stage for his triumphant inauguration on Jan. 20, 2017.

Stay tuned – The Horn News will bring you all the latest updates and breaking news on the Trump Administration in the coming year and beyond.

Comment below with “Make America Great Again!” if you support Donald Trump!