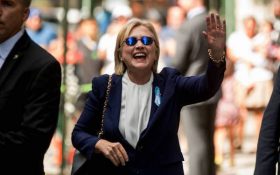 Accusations have been flying back and forth ever since. Supporters of Clinton say her collapse is easily explainable because she was ill from pneumonia. Critics say her apparent blackout episode only adds more questions to the very serious health concerns surrounding Clinton.

In the whirlwind, conspiracy theories and accusations have begun to fly around — and in a way, they’re Clinton’s own fault.

For example, examination of Clinton’s collapse Sunday has raised rumors surrounding a strange metal piece apparently falling out of her pant leg.

That’s according to social media users, which posted the following —

Is there anything to this rumor?

No, probably not. There’s no telling what that is, if anything.

But that won’t stop rampant speculation.

Meanwhile, on Twitter, social media became a frenzy of conspiracy about the possibility of a Hillary Clinton body double.

It’s all silly, because it’s incredibly easy to solve.

There’s no need to speculate about what’s true and what isn’t — there’s an easy way to put this rumor mill to rest.

And all across America, everyone is asking the same question.

What is Hillary Clinton hiding about her health?

But researchers at America’s top medical institute have just uncovered Hillary’s biggest health secret yet — and it could be a death sentence for millions of American seniors.

Click here to get all the details in this shocking video. [WARNING: Some of the content is very disturbing.]

After all, Sunday’s collapse came after months of speculation on Clinton’s unexplained coughing fits, rumors of anti-seizure medication and ‘short circuiting’ episodes, and a host of other health questions that have dogged the former secretary of state.

After previously dismissing legitimate health concerns as so-called “conspiracy theories,” the Clinton campaign is now blaming her collapse on the candidate overheating during the breezy 75-degree day, while her personal doctor is conveniently claiming she had been secretly diagnosed with pneumonia on Friday.

If Clinton has nothing to hide – if her health is truly as excellent as her doctor claims – she should be eager to dismiss the so-called “conspiracy theories” that surround her apparent unwellness.

There’s an easy way to prove critics wrong. If she was willing to take an independent medical examine from an unbiased third party, Clinton would squash this speculation.

It’s that simple, Hillary. You want them to shut up? Make them eat crow with hard evidence.

But don’t take our word for it. Let’s hear it straight from the Clinton family:

“The public has a right to know the condition of the president’s health.” That’s what former President Bill Clinton told The New York Times in 1996.

It’s not often we say this, but Slick Willy is right. It’s time for Hillary to come clean.

Submit to a third-party examination.

If the rumors are as unfair as the Clinton campaign claims, then she’ll simply prove critics wrong.

Should she agree to a third-party examination, rival presidential candidate Donald Trump would be pressured to do the same, and voters could put all these serious questions to rest once-and-for-all.

But until she does, voters who doubt Clinton’s honesty and integrity will continue to wonder if there’s a cover-up regarding her overall health.

They have a right to. Even husband Bill agrees: health issues are very fair questions to ask our presidential candidates.

By hiding, the Clinton campaign only fuels the conspiracy theory fire.

Hillary Clinton can offer proof of her claims anytime she wishes. She chooses not to.

Is it any wonder that voters then speculate why?

– Stephen Dietrich is the Managing Editor of The Horn News