Cruz accused of fraud in Iowa win - The Horn News 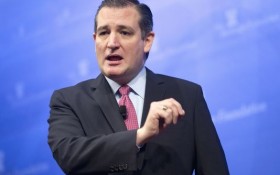 Billionaire Donald Trump is licking his wounds after being upset by Texas Sen. Ted Cruz in the pivotal Iowa caucuses last night.

But at least one candidate is crying foul and accusing the Cruz campaign of using tactics that bordered on cheating and fraud to seal the victory.

In an angry speech last evening, candidate Dr. Ben Carson decried the “dirty tricks” that came to dominate the Iowa caucus voting. And Cruz and his backers seem to be the main culprits.

As first reported by CNN, a Cruz staffer reportedly sent an email to the campaign’s Iowa precinct captains falsely implying that Carson was dropping out of the race after Iowa. The email further instructed the captains to try to recruit the Carson supporters to caucus for Cruz instead.

Iowa Rep. Steve King, a popular Congressman in the Hawkeye State and a Cruz supporter, then tweeted the following:

Carson looks like he is out. Iowans need to know before they vote. Most will go to Cruz, I hope. https://t.co/lW5Js50EMA

Carson backers at multiple precincts say they were contacted by Cruz captains who provided misinformation about Carson suspending his campaign.

In Muscatine, the Cruz captain allegedly told caucus goers to “rethink” wasting their votes on Carson. There were other, similar reports from other precincts around the state, the Carson camp claims.

Carson ended up finishing with a disappointing 9.3 percent of the vote in a state where he once had high hopes, while Cruz secured a 3-point win over his closest rival, Trump.

“This is really a dirty trick,” Carson said in a speech last evening. “This makes me more determined than ever to keep going.”

The scandal won’t do much to further endear Cruz to his GOP rivals, who have tried to make Cruz’s likability and trustworthiness issues in the campaign.

And just last week Cruz took heat in Iowa over a mailer reminding voters that their voting history was public record.

But you can be certain that all Republican candidates will be keeping a close eye on Cruz and his staff as the nomination process rolls on to New Hampshire.