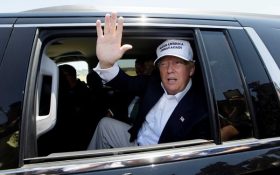 He’s announced a meeting with Mexican President Enrique Pena Nieto just hours before his highly anticipated speech on immigration — and it could score him big points in the polls.

The trip is a bold move for Trump less than 10 weeks before the election, and it offers Trump an opportunity to appear more presidential as he makes his first foreign visit since winning the nomination. Polls show neck-and-neck with Democrat Hillary Clinton, and this meeting could win over moderate voters.

The trip will come hours before Trump delivers a highly anticipated immigration speech, a defining issue for Trump.

Last week, Pena Nieto extended invitations to visit Mexico to both Trump and Clinton, who met with him in Mexico in 2014. The Washington Post first reported Tuesday that Trump was considering making the trip to Mexico.

The invitation to Trump puzzled Mexican analysts. It is not clear why Pena-Nieto, who already has low approval ratings, would agree to a meeting that might boost the candidacy of someone so widely disliked by Mexicans. The newspaper El Universal wrote in an editorial that Trump “caught Mexican diplomats off guard” by accepting the invitation.

For the past 3 years, beloved Hollywood legend Gene Wilder lived in a secret, private hell of chaos and confusion. But as the world mourns the great loss of “Willy Wonka”, a shocking new question has come to light.

Could his suffering and death have been prevented?

According to new research from Tufts University, the answer could be yes. Perhaps if had Gene been mixing up this “cocktail”, the result could have been life-changing.

That’s because the Alzheimer’s that robbed his last few years—and ultimately caused his death—could have been permanently ended with this homemade “beverage”. Find out more about this cure that could have helped to save Gene Wilder right here.

Trump took to Twitter on Tuesday night to say he looks “very much forward” to meeting with Pena Nieto. The Mexican leader’s office confirmed the meeting with its own tweet, saying the two men would meet privately.

Pena Nieto has been sharply critical of Trump’s immigration policies, particularly the Republican’s plans to build a wall and have Mexico pay for it.

However, the Mexican president cast a sharply different tone late Tuesday, tweeting, “I believe in dialogue to promote Mexico’s interests in the world and, principally, to protect Mexicans wherever they are.”

New Jersey Gov. Chris Christie, a close Trump adviser, has been among those pushing Trump to make the trip, according to a person familiar with their conversations who spoke on the condition of anonymity in order to discuss them publicly. Christie made his own successful trip to Mexico City in September 2014 and has a warm relationship with the Mexican president.

On NBC’s “Today,” Trump’s campaign manager, Kellyanne Conway, was asked if Trump would change his rhetoric in his meeting with Pena Nieto. She said, “I think you’ll see a very presidential Donald Trump.”

Asked if Trump planned to stand by his campaign position of deporting illegal immigrants out of the U.S., she said, “He’s made very clear that he hasn’t changed his position at all when it comes to enforcing the law.” She declined to say what Trump might offer in his speech, except to say he’ll repeat his opposition to amnesty, his commitment to building a wall along the U .S. Southern border and his plan to revoke President Barack Obama’s executive orders on immigration.

Trump has spent much of his campaign railing against the U.S.’s trade imbalance with Mexico and other countries and promising that, if he’s elected president, he will punish companies that try to move jobs overseas.