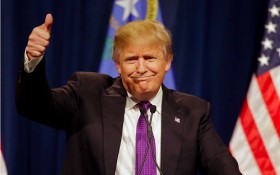 Republican frontrunner Donald Trump made a huge statement with his win in the Nevada caucuses last night, claiming a double-digit victory over his rivals and locking up a firm delegate lead.

And a quick look at upcoming state primaries proves that the Republican establishment may already be out of time to stop his nomination.

Trump currently leads in every Super Tuesday state except Texas, where he trails Sen. Ted Cruz. But those delegates are awarded proportionally and Trump is still expected to leave the Lonestar State with dozens of delegates.

But Rubio and Kasic are both trailing Trump in their home states. And of they cannot defend their home turf, they’ll be at a loss to explain to voters and donors which states they could win going forward.

Of the trio with looming home-state primaries, Cruz may be in the strongest position. But Cruz will have to win more than just Texas on Super Tuesday if he doesn’t want to be looking up at Trump in the delegate count, meaning Cruz would have to make up huge amounts of ground in almost every other state primary.

Kasich and Rubio, meanwhile, continue battling for many of the same votes from establishment Republicans uneasy with the outsider Trump. As long as both remain in the race, they could continue to split the establishment bloc, which also works in Trump’s favor.