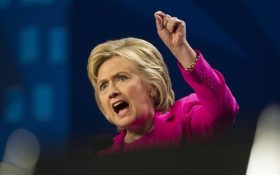 Things are not well in Hillary Clinton’s inner circle. Ever since the former secretary of state lost to President-elect Donald Trump, Hillary and her followers have been in an emotional nosedive.

Despite rigging the election, the American people rejected the Clinton crime family… and the people that make up “Hillaryland” are not happy about it.

Now, reports are surfacing that infighting among Clinton insiders has gotten particularly vicious. Many are blaming Hillary’s top aide, Huma Abedin, for their stunning loss.

“The real anger is toward Hillary’s inner circle,” a Clinton insider told Vanity Fair. “[Abedin] was enjoying the red carpet and enjoying the photo spreads much too much in my opinion. She enjoyed being a celebrity too much.”

When asked about Abedin’s uncertain future, the insider confessed: “Maybe I’m just p****d off, but I really don’t give a s**t about what happens to Huma to be honest with you.”

According to The New York Times, Abedin is having trouble coming to grips with the blame. But it’s not just Clinton’s inner circle taking things poorly.

Reports say former President Bill Clinton has started yelling at aides, while angry donors are demanding answers about their money.

Meanwhile, Hillary’s mental health has been the subject of speculation, Clinton campaign strategists scream at each other in public, and supporters continue to openly weep over the loss. Even Hillary’s celebrity backers are having difficulty reconciling the loss.

Cheer up, guys. There’s another election in four years you’ll have a chance to rig.