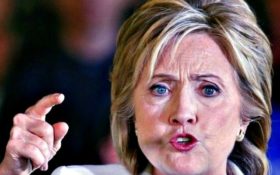 As Election night was winding down and President-elect Donald Trump’s victory became clearer, the electoral map wasn’t the only thing turning red.

According to multiple reports, Democratic nominee Hillary Clinton was so blinded by rage as it became apparent she would not become the first female president that she physically assaulted campaign managers Robbie Mook and John Podesta, radio host Todd Kincannon said he heard from a CNN reporter present that night.

Of course, the “Clinton News Network” couldn’t be expected to be held to a high standard of journalism and report this atrocity.

Kincannon tweeted, “The CNN reporter didn’t fail to report it. His editors will not let him. CNN has banned all ‘Hillary in the bunker’ stories.”

Luckily, the CNN reporter wasn’t the only one present to witness her meltdown.

He continued that her campaign staff had to restrain her from being seen in public, and it “took hours to calm her down.”

And this Election night temper tantrum wasn’t the first.

As poll numbers began to sway in Trump’s favor towards the final days of the election, Hillary and Bill Clinton had a screaming match over the phone in which they exchanged blame for who was at fault for the failing campaign.

The argument was so malicious, it ended with the former President throwing his phone into the Arkansas River.

One of Bill’s closest advisors told Ed Klein at the Daily Mail that Hillary was attempting to blame FBI Director James Comey’s reopening of the investigation into her email server the cause of her dropping popularity, but Bill wasn’t buying it.

“As far as he was concerned, all the blame belonged to campaign manager Robby Mook, campaign chairman John Podesta and Hillary because they displayed a tone-deaf attitude about the feeble economy and its impact on millions and millions of working-class voters,” Klein said.

During much of the campaign, Bill was kept away from the inner-workings of Hillary’s presidential bid, out of fears that his personal scandals would plague her nomination. In retrospect, his insights could have clinched her the working class vote she largely missed.

But reports of this are still nothing new. Hillary’s character has been consistently marred by her temper for years, according to those closest to her.

White House Secret Service agent for President Bill Clinton, Gary Byrne authored a tell-all book entitled “Crisis of Character”, which includes multiple episodes of Hillary’s rage. He claims she screamed obscenities not only at Bill, but at White House staffers and the Secret Service.

Byre recalls episodes of alleged domestic abuse against Bill, specifically an instance where the President sported a black eye following one of their aggressive arguments. Her leadership style is described in the book as, “volcanic, impulsive, enabled by sycophants, and disdainful for the rules set for everyone else.”

That doesn’t sound like someone with the temperament ready for the Oval Office.