Celebrity morons have MELTDOWN over Electoral College - The Horn News 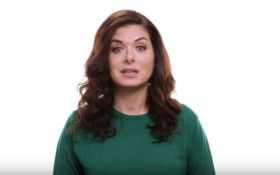 The whining celebrities are crying again, this time coming together to urge the members of the Electoral College to “Dump Trump.”

In a public service announcement released Wednesday by the group ironically called Unite for America, actors Martin Sheen, Debra Messing, BD Wong, and others call for further division, requesting that electors vote against the decision made by their state and, “vote their conscience.”

Sheen begins the video by explaining to the Electoral College the reason for their creation by the Founding Fathers, as if fictionally playing the President on The West Wing lends him credibility. He quotes the Federalist Papers that their job is to ensure the presidency goes to someone who is, “to an eminent degree, endowed with the requisite qualifications.”

What follows is a series of reasoning from uninformed celebrities explaining why they think President-elect Donald Trump does not live up to these standards.

Messing refers to him as, “lacking the stability,” a somewhat hypocritical accusation for someone who got in a heated Twitter war herself.

Messing and actress Susan Sarandon exchanged tweets in November regarding their election support. Sarandon, a supporter of Sen. Bernie Sanders, was relatively calm and suggested those who oppose Trump should engage in dialogue with his supporters to understand their differences.

Messing responded with profanities and blanket judgment of all Trump supporters tweeting: “JESUS CHRIST. NOW she wants to give racist, islamophobia, homophobic, sexist, mysogynists a chance! ‘Pure 4 Bernie. F—K everyone else.”

Not very ‘united for America’ of her.

The celebrities go on in an attempt to buffer their apparent hatred for the president-elect by repeating they do not need the electors to vote for failed Democratic nominee Hillary Clinton, but rather “someone you consider especially competent to serve as president of the United States of America.”

According to these celebrities, voting against the way of their state will secure the electors a spot in history books as an “American hero who changed the course of history.”

If they hadn’t bribed them enough, these D-list celebrities desperately offered the electors their respect.

The electors will cast their presidential votes on December 19th, likely ignoring the calls from these self-important celebs.

Watch the embarrassment for yourself :