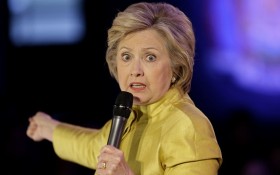 Failed Democratic presidential candidate Hillary Clinton wants the American people to know that the hacked emails that revealed the shocking corruption in her campaign and the Democratic National Committee were a plot by Russia “to undermine our democracy” and were personally ordered by President Vladimir Putin “because he has a personal beef against me.”

Since then, the media has eaten the story up — and if Americans only read liberal media sources like The New York Times and CNN, that’s what they’d believe.

That’s according to Julian Assange, the founder of WikiLeaks. The controversial Assange, whose organization was behind the major leaks, came forward in a revealing interview with Fox News’ Sean Hannity and admitted the mainstream media spin is simply not true.

It’s something The Horn News has been warning for months – the mainstream media was covering up the real truth behind the Russian email hacking plot, and Democrats are exploiting it.

Assange confirmed our reports in quick preview of his Fox News interview, which was revealed Monday.

Assange: Yes. We can say, we have said, repeatedly over the last two months that our source is not the Russian government and it is not a state party.

Even after the election, Hillary won’t stop lying straight to America’s face.

Is there any wonder U.S. voters didn’t want her in office?