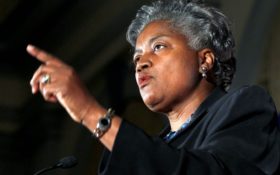 Liberals have been strongly pushing the narrative that Russia hacked the Democratic National Convention to influence the election in favor of President-elect Donald Trump even since their defeat in November.

Now one high-powered Democrat is using the alleged hacking in an effort to divert guilt away from her own massive wrongdoings and onto Donald Trump.

Interim head of the DNC Donna Brazile told, ABC’s Martha Raddatz, “The emails were weaponized. Donald Trump used this information in ways to also sow division. I was very disappointed in his repeated usage of the stolen information.”

It’s no surprise that Brazile would be disappointed in the repeated usage of leaked emails, because some of them proved that she was guilty of manipulating the media.

It’s information that NEEDS to be repeatedly used in order for the public to be adequately informed.

In November, The Horn News reported leaked emails revealed Brazile was receiving Presidential debate questions from CNN and relaying them to the Clinton campaign.

She was working as a CNN contributor at the time of the debate, allowing her to abuse her media connections to climb the political ladder.

She went on to complain about the leaks saying, “They came after us absolutely everyday until the end of the election. They tried to hack into our system repeatedly.”

But there’s one major problem with that statement: Even President Barack Obama doesn’t agree with her.

And discrepancies in their stories lend more credibility to the theory that Brazile is using the hacks as a distraction from the PROOF that she was helping CNN and the Clinton campaign collaborate.

President Barack Obama said Friday that the hacks ended in September after he met with Russian President Vladimir Putin, not until the very end of the election as Brazile claimed.

Liberals’ complaint that the Russians were interfering to give Trump an upper hand is minor in comparison with the inside election rigging that was revealed.

“This whole thing is a spin job,” said Trump’s incoming chief of staff, Reince Priebus. “And I think what the Democrats ought to do is look in the mirror and face the reality that they lost the election.”

Trump commented Sunday evening, tweeting, “If my many supporters acted and threatened people like those who lost the election are doing, they would be scorned & called terrible names!”

As Democrats continue to wallow in self-pity searching for anyone to blame for their loss, Trump has moved on, rapidly filling Cabinet positions and preparing for his January 20th inauguration.