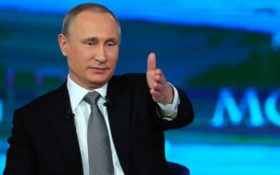 Don’t be surprised if Democrats seem even more depressed than normal today. Despite their best efforts, today the Electoral College will vote to make Donald Trump the next president of the United States.

There’s nothing the liberals can do about it, and they know it. So, expect them to be a little extra hateful and unhinged on MSNBC and Twitter. It’s understandable.

But they plan to do more than shed a few tears into their organic free trade coffee with soy milk.

They’re trying everything they can to delegitimize Donald Trump’s presidency before it even begins – by claiming that the Russian government somehow stole the 2016 election.

Turns out, the Russians tried to hack the Republican Party too.

And that fact alone totally debunks the liberal conspiracy theory.

Kremlin spies tried to hack into a Republican National Committee e-mail address during the election, but they couldn’t get past the RNC’s security, intelligence experts told the Wall Street Journal on Thursday.

If Moscow ran a one-sided operation only meant to help the President-elect Donald Trump, that’s a strange way of showing it.

This shocking revelation means that Russia targeted Americans across the board, but only succeeded with the Democrats because they are so weak on defense – whether it comes to fighting terrorism or protecting their own e-mail servers.

After all, this isn’t the first time this has happened on their watch.

During the Obama administration, hackers broke into:

Those are just the hacks that we know of.

Why would Russia oppose Hillary Clinton’s election, anyway? As Secretary of State, she gave Russia the greenlight to take over a major uranium company, Uranium One, after the Clinton Foundation received $2.35 million in donations.

Still, Hillary Clinton told a dinner for her high-dollar donors on Thursday that Vladimir Putin had hacked her campaign servers, “because he has a personal beef against me.”

“The press is finally catching up to the facts, which we desperately tried to present to them during the last months of the campaign,” Clinton told the elite gathering. “This is not just an attack on me and my campaign … This is an attack against our country.”

You don’t have to be a Beltway politico to see Hillary’s strategy.  She’s complaining that the Russians “stole” in the election. She’s implying that Donald Trump’s presidency is illegitimate. And she’s trying to set up herself as Vladimir Putin’s worst enemy.

Then, in 2020, she can run for president to get revenge against Russia on behalf of the entire United States. Like “Rocky IV,” but without the first shred of excitement.

Unlike Rocky, she and her entire party are weak. Weak on national security, weak on cyber security. Weak on protecting American jobs. Weak on defending American culture, our border, and our constitution.

And later today, they’re going down for the count — for at least the next four years.