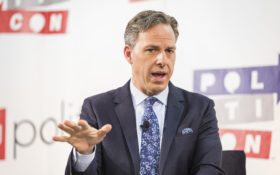 CNN star Jack Tapper went ballistic on his staff last Tuesday when they messed up his attack on President Donald Trump.

Tapper “blew up at his staff” in a screaming fit meltdown when they bungled a series of videos on Trump’s recent meeting with Russia.

When the CNN host’s anti-Trump tirade was interrupted by his staff’s mistake, he became visibly upset on-air.

“It all reportedly started when Tapper wanted to show three clips of Trump in chronological order, beginning with him famously saying of alleged Russian election meddling, ‘I don’t see any reason why it would be Russia,'” Fox News’ Brian Flood reported.

“The second clip was Trump’s correction, when he said he meant to say he didn’t see any reason why it ‘wouldn’t’ be Russia that interfered with the 2016 election,” Flood wrote.

The third clip was supposed to be Trump acknowledging that Russia interfered while adding it “could be other people also” — but his staff wasn’t ready in time.

“Alright, we don’t have that clip for some reason,” Tapper said, clearly angry that his anti-Trump segment was off-pace.

Once the camera’s turned off, he went nuclear over the botched clips, according to a report from Mediaite.

“During the commercial break,” Mediaite reported. “Tapper went ballistic, berating his staff in front of the entire studio for ‘not reading my emails!’”

You can see the botched clip here —

Not a big deal…. unless, of course, one is suffering from Trump Derangement Syndrome.

Of course, this isn’t the first time a CNN anchor has lost his cool over Trump. Since the president took office, CNN hosts have been caught up in numerous screaming fit meltdowns when their anti-Trump rants are interrupted.

Last May, for example, CNN’s Kate Bolduan yelled that a Navy SEAL wasn’t allowed to question her network’s bias.

And last October, Andrew Cuomo freaked out after Trump labeled him as “fake news” and screamed at his guest.

In December, Don Lemon had a screaming fit meltdown at a guest when they tried to steer the conversation away from Lemon’s anti-Trump rant.

Who could forget CNN’s Jim Acosta being so angry at the president that he started screaming during a children’s Easter ceremony.

Is there any wonder that CNN’s ratings have sunk so low, they have less total viewers than reruns on the Hallmark Channel?

It’s almost enough to make you feel bad for these furious, but helpless, CNN anchors.