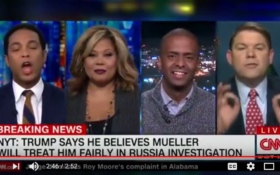 On Thursday, Lemon suffered an embarrassing, on-air meltdown when confronted by conservative panelist Ben Ferguson — and we have the video.

Faced with unflattering facts about Obama and Hillary, Lemon reacted like a five-year-old child. He screamed “No, no, no!” over Ferguson eleven times in a row, then cut off the live feed and ordered the show to commercial.

It’s this exact kind of hysterical, unhinged meltdown that proves how insane the mainstream media has become.

Lemon and two other panelists, Bakari Sellers and Tara Setmayer, were ranting about how wrong President Donald Trump was in his recent interview with The New York Times.

Sellers was implying that Trump’s administration was more corrupt than Obama’s and claimed that no Obama advisors had even been convicted of a crime — despite Gen. Michael Flynn himself being a former Obama appointee. That’s when Ferguson jumped in.

“Ferguson responded that many people believe ‘special treatment’ was given to corrupt Obama officials whose behavior would have been prosecuted if they were Republicans,” The Gateway Pundit reported.

In response, Lemon lost his mind. He began talked over Ferguson, and then repeatedly screamed “NO!” so viewers couldn’t hear Ferguson’s response — and finally ordered his producers to cut the live feed and go straight to commercial.

Warning: This will leave you furious —

Do you trust CNN to tell the truth?

Is CNN a trustworthy organization?