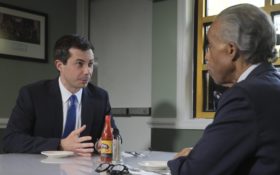 America was never a great country, he said.

Buttigieg took a swipe at Donald Trump’s “Make America Great Again” campaign slogan during a campaign stop in South Carolina… and while he was at it, he smeared his own country.

“That past that he is promising to return us to was never as great as advertised,” Mayor Pete said, “especially for marginalized Americans.”

Mayor Pete — who went to Harvard and Oxford before working for an elite consulting firm — thinks America has handed him a raw deal.

“America is a great nation—both today and always,” said the Republican Party of Indiana, his home state.

“Will Pete Buttigieg apologize (like other Dems have had to do) for saying our county isn’t great?!” the GOP asked. “We certainly think he should!”

Buttigieg got into so much hot water that the mainstream media tried to save him from himself. The Soros-funded Media Matters lied that Fox News had “cropped” the video. And a writer for The Washington Post tweeted that the “actual quote” only criticized “Trump’s ‘great again’ slogan.”

But voters aren’t fooled, because the full video shows Buttigieg trashing America’s “past,” not Trump’s saying.

And the worse news is, this isn’t the first time Buttigieg has disrespected his country. He said the exact same thing last month.

The mayor said that President Trump’s patriotic MAGA slogan is “selling an impossible promise of returning to a bygone era that was never as great as advertised to begin with.”

Take him at his word: He’s bashing America, not some political jingle.

By running down his country, Buttigieg joins the “alarmingly long list of Democrats who think America pretty much bites,” according to Cheryl Chumley at The Washington Times.

It’s a long list of top liberals and presidential contenders—like Bernie Sanders who said, “There is something fundamentally immoral and wrong about” the United States of America.

Or Senator Cory Booker, who said life in America is “savagely wrong.”

Another Democrat who cranked up the anti-American rhetoric when he thought about running for president was New York Governor Andrew Cuomo.

“We’re not going to make America great again,” he said. “It was never that great.”

Barack Obama’s Attorney General, Eric Holder, thinks America is so evil that he asked Trump, “Exactly when did you think America was great?”

Some candidates turn their hatred against the American people. Hillary Clinton—who could always throw her hat into the ring in 2020—thinks half of America could fit into a “basket of deplorables.”

Then there’s the last president of the United States, Barack Hussein Obama, who spent his whole life tearing down his country.

And he spent eight years apologizing for the U.S. or dissing it on foreign soil.

The United States is “still working through some of our own darker periods in our history,” he said in Islamist Turkey. “Our country still struggles with the legacies of slavery and segregation, the past treatment of Native Americans.”

But he always thought America had one shot at redemption: Barack Obama.

When he ran for president, Michelle Obama said it was the first time in her “adult life” that she felt proud of her country.

“I would like to think that with my election,” President Obama said in London, “you’re starting to see some restoration of America’s standing in the world.”

Conservatives are puzzled why Democrats want to run for president of a country they despise so much.

“Why do Democrats constantly downplay America’s greatness?” Sean Hannity asked. “This is the most amazing country in human history!”

Hannity said that Democrats should “be proud and defend our freedom!”

You can bet Pete Buttigieg and the other 2020 Democratic candidates won’t!