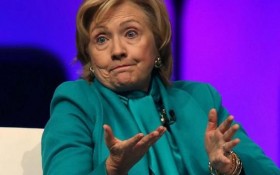 Former secretary of state Hillary Clinton looks at the Democratic Party like National Rifle Association members look at our guns: You can have it when you pry it out of her cold, dead hands.

A premier national columnist believes the two-time loser is planning a third run for president of the United States in 2020 – and her own party is begging her to stay at home.

A columnist for the New York Post signed up for  Hillary’s e-mail list and said the former first lady is sending out more and more desperate pleas for help, action, and money… all to prepare for a rematch with President Donald Trump in two years.

To gear up, Hillary has founded a series of front groups allegedly dedicated to fighting for “progressive” values.

For example, as soon as the media started blasting Trump’s border security policies, Hillary announced that her new group, “Onward Together,” plans to raise $1 million to fight him.

Soon after Justice Anthony Kennedy announced he was retiring from the Supreme Court, she started a brand-spanking-new organization called Demand Justice – and named her campaign manager, Brian Fallon, its head.

But they’re really just ways to collect money and contacts before her next campaign kicks off.

“Onward Together, formed in May 2017, is a Clinton 2020 campaign vehicle in waiting,” writes columnist Michael Goodwin.

And Demand Justice says it’s “dedicated to advancing the vision that earned nearly 66 million votes in the last election.”

Hillary has denied she has any further interest in running for president. In October 2017, she told BBC Radio 4, “No, I’m not going to run again.”

And in her book “What Happened,” she promised that her days as a presidential candidate were behind her – but her actions tell another story.

On Friday, she spoke to the second largest teachers union in the country, the American Federation of Teachers, which is a major part of the Democratic campaign machine. Possible 2020 presidential hopefuls Elizabeth Warren and Bernie Sanders are scheduled to speak this weekend, too.

Her desperate excuses for losing in 2016 and shrill pleas for attention convinced Politico columnist Matt Latimer a year ago that “barring some calamity, Clinton is running.”

But the idea of Hillary running again in 2020 doesn’t exactly have her fellow Democrats feeling a thrill running up their legs.

When Goodwin told his liberal Democratic friends he thought Hillary was ready to rumble in the 2020 primaries, “It was unanimous — they were horrified,” he wrote. “They want a new blockbuster, not a sequel to failure.”

If Hillary decides to run for the third time in four presidential elections, she will face an uphill battle in her own party.

For starters, she’s not doing well in polls. A Harvard CAPS/Harris poll taken last month showed Clinton coming in a distant second – behind elderly former Vice President Joe Biden. The former Secretary of State hardly had half his support: One-third of Democrats backed Biden, versus 18% for Clinton, barely ahead of Sanders.

Even her former staffers are saying Hillary should hang it up.

“It’s a pipe dream,” Eldod said – because Hillary, who would be 73 on Election Day, might not decide to run.

Eldod told her old boss not to bother – because she wouldn’t even finish in the money.

“To be honest with you, I don’t know that a run this time around would yield a first- or second-place finish,” she said.

“There’s a lot of new people in the party who are stepping forward,” Eldod said. “I think we’ve got a very deep bench of strong candidates and she knows this.”

She gave her professional opinion: Keep walking the woods in Chappaqua.

“I would advise against her running – not because I don’t think she’s qualified. Of course, she is – but I think that she knows it’s time for faces and new leadership to step forward.”

But at least one person wants to see Hillary  make one more run for the Oval Office: Trump.

I was recently asked if Crooked Hillary Clinton is going to run in 2020? My answer was, "I hope so!"

We hope so too — there’s nothing better than a good old-fashioned win against a Clinton.