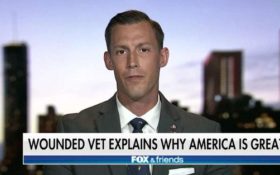 New York Democratic Governor Andrew Cuomo stunned Americans this week when he declared, “America was never that great” — and it left this wounded veteran spitting mad.

Marine Staff Sgt. Johnny “Joey” Jones — a double amputee and purple heart awardee — shot back at Cuomo in a recent appearance on Fox News. Jone says Cuomo is a “coward” that doesn’t know what he’s talking about when it comes to America.

In an interview with “Fox & Friends” on Friday, Jones explained that because Americans have rejected Cuomo’s policies, his pathetic reaction was to say, “It wasn’t worth fighting for anyway. America wasn’t that great anyway.”

The former Marine went on to give Cuomo a lesson on why Americans voted for Trump in 2016.

“I want to give Gov. Cuomo a little bit of a lesson real quick: When the president says, ‘Make America great again,’ what he means and what voters who voted for him hear is, ‘Make our elected representatives represent our greatness again,'” Jones said.

It is people like Coumo that make-up the so-called “swamp” that Trump wants to get rid of in Washington, D.C.

This meltdown by the Democratic governor shows not only his true colors, but it also proves what his political party truly thinks about the country they represent.

“We’re a great place. We’ve pretty much always been a great place. Never a utopia, but always striving to be one,” Jones said. “And anyone in charge of a state as important as New York that can’t see that has no place in the political discourse.”

Jones fought for our country, and ultimately lost both his legs in battle — how this liberal governor says his sacrifice wasn’t worth it?

Thankfully, we have American warriors willing to stand up and fight for the country they believe it — and for true patriots, that makes our country as a whole pretty darn amazing.