Sarah Palin gets last laugh over Ocasio-Cortez - The Horn News 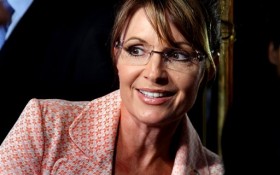 A few years ago, when Sarah Palin said Democrats like to “pal around with terrorists,” all the smart, inside-the-Beltway types laughed—but today, terrorists are laughing all the way to the bank, thanks to uber-leftist Alexandria Ocasio-Cortez.

Cortez asked her 5.3 million Twitter followers to send bail money to black-clad left-wingers arrested for political violence — which proved Palin was right all along.

Talk about getting the last laugh. Over the weekend, a conservative organization held a “Straight Pride” March in Boston — a parody of raunchy “gay pride” marches in places like San Francisco and New York City.

Antifa, designated a leftist domestic terror group by the U.S. Interior, decided to jump into the fray — violently.

“We’re covered in black so when we attack these guys we can’t be prosecuted,” an Antifa member told The Boston Herald.

When it was all said and done, 36 Antifa activists were arrested for crimes like “assault and battery of a police officer.”

That’s when Alexandria Ocasio-Cortez and fellow “Squad” Democrat Ayanna Pressley tried to save the day…for the terrorists.

AOC tweeted out to her supporters “one way to support the local LGBTQ community impacted by Boston’s white supremacist parade” is to “contribute to the Bail Fund for the activists who put themselves on the line protecting the Boston community.”

And she retweeted a donation link posted by Pressley.

Contribute to the Bail Fund for the activists who put themselves on the line protecting the Boston community:https://t.co/z2NRSqHMve

Of course, Antifa set up the bail page before the event took place… because they knew their people had violent intentions and would break the law!

Of course, you don’t need a crystal ball to know Antifa is going to cross the line into violence.

It always has, and it always does.

Just ask conservative journalist Andy Ngo, a gay Vietnamese man who suffered brain damage after an assault. His crime? Taking a video of an Antifa riot in Seattle.

Or, ask ICE agents in Washington state. Antifa brought its terror into the U.S. interior when one of its activists, named William Van Spronsen, attacked an ICE facility after AOC called them “concentration camps.”

At first, AOC refused to even condemn the attack, and so did fellow “Squad” member Ilhan Omar.

Or, ask anyone in Washington, D.C. on the day of President Donald Trump’s first inauguration. Even CNN had to report that Antifa thugs “smashed storefronts and bus stops, hammered out the windows of a limousine and eventually launched rocks at a phalanx of police lined up in an eastbound crosswalk.”

Democrats might think this is a reaction to President Trump — but Antifa has been violent way before he moved from Trump Tower to the Oval Office. The Department of Homeland Security has classified Antifa’s actions as “domestic terrorist violence” since early 2016… under the Obama administration.

But it kept that classification a secret, to protect Obama’s political buddies.

Now, Congress is considering a move to openly recognize Antifa is a “domestic terrorist” organization, under a bill introduced by Republican Senators Ted Cruz and Bill Cassidy.

Cassidy told “Fox and Friends” that his bill would give law enforcement greater tools to combat Antifa, because “their intimidating tactics should be stopped where they are and not allowed to spread.”

The Democrats’ and Republicans’ response to Antifa violence couldn’t be more different.

Cortez isn’t even the first leading Democrat to back the Antifa terror group.

Former Rep. Keith Ellison tweeted out his support of Antifa—while he was deputy chairman of the Democratic Party!

Last January, in a now-deleted tweet, he called the Antifa handbook “the book that strike (sic.) fear in the heart of” Donald Trump.

If so, America’s future under the Democrats is terrifying, because AOC now has a pattern. She and Antifa terrorists have a three-part dance:

Second, the Democrats’ terrorist arm—Antifa—beats those people to a pulp. It shoots at ICE facilities, beats up elderly women, and throws rocks at the police.

Third, Democratic leaders like the mayor of Portland refuse to jail them, or national Democrats like AOC raise bail money to spring them out of jail, so Antifa can kick up its terror campaign all over again.

There’s a word for that: Fascism. The safety of America’s police officers, and the survival of the First Amendment, is at stake.