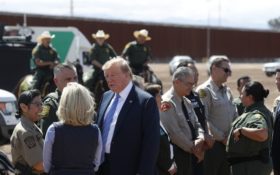 Earlier this week CNN’s Chris Cuomo proudly said the radical leftist group Antifa had “a good cause” — despite the so-called “Anti-Fascists” being named a domestic terror group by the U.S. State Department.

But recent FBI warnings have proven that the group will do ANYTHING to sabotage America under President Donald Trump. An official investigation was opened after authorities say the group sought to purchase guns from a Mexico cartel-linked henchman to attack U.S. law enforcement.

According to The San Diego Union-Tribune, Antifa looked to “stage an armed rebellion” at the southern border.

An excerpt of the report, obtained by The Union-Tribune read that illegal immigrants “were encouraged to bring personally owned weapons to the border and [Antifa] also intended to purchase weapons from a Mexico-based cartel associate known as Cobra Commander, AKA the Mexican Rambo, and smuggle the weapons into the United States.”

FBI distributed the warning across a wide range of law enforcement vessels.

Riebeling has a savage history. He has been arrested for kidnapping and robbery in the past and has a notorious reputation for being a dangerous criminal.

Duke denied the allegations: “Here I find the government again trying to tie me into some [stuff] I wasn’t involved in,” he said.

Both Riebeling and Duke also deny they ever met. However, the two of them showed up together on federal authorities list of persons involved in Tijuana border raids in both November 2018 and January 2019.

It’s a scary reminder of how far the alt-left could go — even conspiring against our own country.