Ilhan Omar HATED being asked THIS question - The Horn News 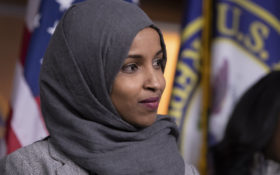 Ilhan Omar has no problem bad mouthing President Donald Trump, Border Patrol agents, American soldiers, or the country that took her in from her war-torn native Somalia.

But when it comes to one of the most barbaric forms of torture, Omar won’t even open her mouth.

As a matter of fact, when Omar was asked to condemn the practice she exploded with anger at the questioner!

At a recent conference, Omar was asked to condemn female genital mutilation (FGM), an agonizing ritual where women have parts of their vaginas removed so that they will not enjoy sex… and thus be less likely to cheat on their husbands.

About 200 million girls around the world have experienced the gruesome practice, according to the World Health Organization, including 98 percent of girls in Somalia.

But there’s a problem…a big one: Most of the countries that practice it are Muslim.

The leading nations where grown men slice up women’s—or girls’—private parts are Guinea, Djibouti, Egypt, Mali, Sierra Leone, and Sudan, all dominated by fundamentalist Islam. Nine out of ten girls will be butchered in these Muslim-majority nations.

But it’s not just a problem overseas: The number of women at risk of FGM in the United States has doubled about every 10 years.

Half-a-million American women could have FGM practiced on them in the United States—more than 100,000 of them under the age of 18.

It’s so bad that Republican women in the Senate have introduced a bill to ban FGM in the USA. Yet Omar won’t say a word about it!

Instead, she attacked the questioner and played the victim card.

Omar, who is one of the four radical left-wing women who are part of “The Squad,” said even asking the question of a Muslim was “appalling”!

It’s “very frustrating” that she’d even be asked to condemn a human rights abuse, she went on.

“I am, I think, quite disgusted – really to be honest – that as Muslim legislators we are constantly being asked to waste our time speaking to issues that other people are not asked to speak to, because the assumption exists that we somehow support” practices common in these nations.

But Omar’s try at painting the questioner as an anti-Islamic nutcase backfired… big time!

It turns out the woman who asked the question, Ani Zonneveld, is president of Muslims for Progressive Values.

To add to Omar’s humiliation, Zonneveld was a featured speaker at the same conference as the congresswoman, an event with the clunky name of “the Muslim Caucus Collective for Equitable Democracy.”

Organizers invited both women to the event — and Omar accused her fellow Muslim of Islamophobia!

Conservatives said Omar’s stonewalling the question is part of a disturbing trend.

“She spent two minutes condemning questions she doesn’t like, so clearly she has no problem condemning things,” wrote Sean Davis, the co-founder of The Federalist website. “It’s what she repeatedly refuses to condemn that’s troubling.”

It shouldn’t be surprising Omar won’t whisper a peep about this disgusting torture.

She won’t condemn terrorism overseas and refused to criticize al-Qaeda and Islamic extremism.

Even asking her to speak out against radical Islamic terrorism was Islamophobic, she said.

She and the Squad are “no longer going to allow the dignification of such ridiculous… ridiculous statements,” she said at a press conference two weeks ago.

When a reporter asked her, “What’s your message” to young men being recruited by ISIS, she scowled and walked away.

Omar has backed Americans who volunteered to commit terrorism. She asked a judge to go easy on 9 terror recruits in 2013.

Omar joined AOC in accusing ICE of running “concentration camps”—but she declined to say she didn’t approve of the terrorist attack on an ICE facility by an Antifa terrorist in Washington state.

Who’s side is Omar on? Not America’s — and not 200 million fellow women living under Sharia Law.