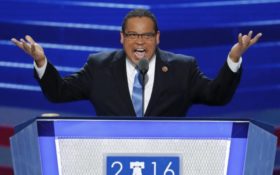 Minnesota’s Democratic Congressman Keith Ellison, the Deputy Chairman of the Democratic National Committee, has just raised a lot of eyebrows over his latest tweet.

On Wednesday, Ellison tweeted a photo with an Antifa handbook and warned President Donald Trump that more “alt-left” violence was coming to the streets of America.

Antifa is a far-left organization that promotes violence and rioting — and it was officially declared a domestic terrorist group by New Jersey’s Homeland Security office last summer after the outbreaks of alt-left violence.

At @MoonPalaceBooks and I just found the book that strike fear in the heart of @realDonaldTrump pic.twitter.com/r81nYoeqpL

Antifa proudly declares that they use terror and violence to suppress conservatives, and were the black-clad rioters seen beating elderly people and women after the election, the violence in Washington, D.C. at Trump’s inauguration, the attempted assassination of House Majority Whip Steve Scalise, at least one murder of a conservative student, and more.

The group is funded in part by liberal billionaire George Soros, and is currently under investigation by the FBI for demanding the violent end of the United States.

Ellison is a member of Congress and serves the people of the United States… and is openly calling for terrorist violence on our streets!?

Worse, it seems pretty clear that as the DNC Deputy Chairman he most speaks for the whole party.