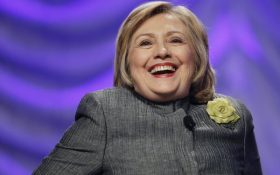 Twice-failed presidential candidate Hillary Clinton isn’t going away — and on Monday, Hillary covertly launched a plan to swing the 2018 election.

Why? Partly as revenge against President Donald Trump. But also because her plan will line her pockets with millions of dollars while positioning her front-and-center in the Democratic Party for decades to come.

On Apr. 30, Hillary reactivated her dormant political group OnWard Together. She told Bustle Magazine the groups goal was to guarantee voters advance “the progressive vision that earned nearly 66 million votes in the last election.”

Heading into NYC for @OnwardTogether’s first annual Partners Collaborative to discuss how we can work together to defend our progressive values.

The organization is behind the wave of angry, violent confrontations at Republican town halls and offices around the country in 2017.

In fact, Onward Together funded much of the violent alt-left “resistance” groups behind multiple riots afollowing Trump’s election.

“I’m not going anywhere,” Hillary promised in May 2017. “I have a big stake in what happens in this country.”

Monday, she returned as promised. She said she’s “working here today to try to make sure we’re prepared to do everything we can in November,” Hillary told Bustle before making a public call-to-arms to 11 anti-American “resistance” groups she’d previously pumped millions of dollars into.

The timing of Hillary’s announcement isn’t a coincidence, say critics.

“Longtime Clinton supporters last week received an invitation offering access to the family (the green invitation features photos of Bill, Hillary and Chelsea) at a Clinton Foundation benefit on May 24 in New York, at prices ranging from $2,500 (“Friend”) for cocktail party and dinner, up to $100,000 (“Chair”) for “Leadership Reception for two, a premium table of ten, program recognition as Gala Chair and invitations to the Clinton Foundation Annual Briefing,” Axios reported on Monday.

The Clinton Foundation is being investigated for illegal “pay to play” politics while Hillary was secretary of state, where a “mountain of evidence” of kickbacks, extortion, money laundering, and more has reportedly been discovered.

However, donations to the organization have dried up in recent years — and virtually disappeared when Hillary blew the 2016 presidential election.

Even her controversial book “What Happened” had very disappointing sales last year, and it has lead to widespread speculation that Hillary needs to regain a power position in American politics if she’s to continue her expensive lifestyle.

Hillary’s obsession with material possessions is notorious. She had to staff “loot the White House” of everything that wasn’t nailed down when former President Bill Clinton’s second term ended, for example.

“I don’t want to see us go backward. But organized interests fueled by ideology and huge amounts of money are trying to take us backwards. So I feel as strongly today as I ever have that we all have to stand up and defend our country, and most importantly, our democracy,” Hillary told Bustle.

In other words, Hillary is taking numerous $100,000 “donations” from billionaire Wall Street executives to fund radical leftist organizations… so she can keep the average American voter silent on election day.