Hillary Clinton is funding the alt-left (she's NOT going away!) - The Horn News 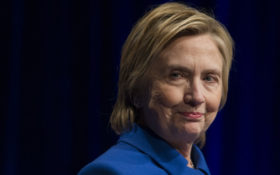 Still stinging from her humiliating November loss, failed Democratic presidential candidate Hillary Clinton is gearing up for a new kind of campaign.

This one isn’t aimed at election… it’s aimed at disruption.

Clinton has quietly launched a group dedicated almost entirely to undermining the results of the election she lost and funding alt-left “resistance” groups violently opposed to the agenda of President Donald Trump.

And of course, she’s also finding a way to use OTHER people’s money to enrich HER friends!

Sponsored: Do THIS 30 minutes before bed and wake up with brand new joints…

Shortly after the payment, her group hired two of her longtime cronies as consultants.

It certainly pays to be in the Clinton inner circle!

Besides paying off her friends, her goal appears to be fomenting “resistance” unrest by giving them cash and other forms of assistance, much as George Soros notoriously does.

So far, she has vowed to fund at least five left-wing groups behind protests and other forms of agitation: Swing Left, Emerge America, Color of Change, Indivisible and Run for Something.

But where’s the money coming from?

Beyond the donation from her campaign – required by law – we may never know. Like her old pal Soros, she is trying to keep her operations as secret as possible.

The Daily Caller noted that her group pulled off a little paperwork trick that could help it become a funnel for an unlimited source of the very same “dark money” she railed against on the campaign trail.

Because it’s registered not as a political group but as a 501(c)4 “social welfare” organization, there is absolutely no law or requirement that would force it to disclose where its money is coming from.

Under current law, ALL of her donors could be kept secret!

That means she could, at least in theory, collect cash from all the shady groups to which she has been repeatedly linked — including brutal foreign dictators — and then use it to pay off “resistance” agitators pushing a leftist political agenda in the United States.

Sounds like a trick right out of the Soros “dark money” playbook.

Who knows… Soros might even be helping to fund Onward Together himself.

Under the rules, there’s no way to know.

The name of her group, Onward Together, is ironic given that Clinton remains a divisive figure. That’s true not only of the nation as a whole (a recent Bloomberg poll finds she has a 58 percent unfavorable rating), but even — perhaps especially — among Democrats.

Many don’t want her around anymore, and are livid at her insistence on seeking the spotlight.

“If she is trying to come across as the leader of the angry movement of what happened in 2016, then she’s achieving it,” an unnamed former senior aide to President Barack Obama told The Hill in June. “But part of the problem she had was she didn’t have a vision for the Democratic Party, and she needs to now take a break and let others come to the forefront.”

Clinton, however, has stubbornly refused.

“I’m not going anywhere,” she said in May. “I have a big stake in what happens in this country.”

With her book coming out next month — and more violent protests to encourage — she will no doubt become more visible than ever.