Clinton empire on verge of collapse!? - The Horn News 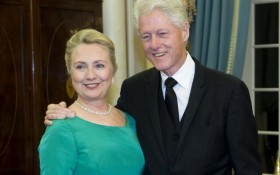 Former Secretary of State Hillary Clinton is trying her best to fade into the background – but her scandals remain front-and-center, and new evidence continues to emerge that the family charity was actually a massive pay-to-play scheme.

The Clintons have insisted that the charity is completely separate from the family’s infamous political ambitions… but they’ll have a much tougher time making that case with the new numbers just out.

After Hillary quit the Clinton Foundation and it became increasingly clear she might not even win the Democratic nomination much less the U.S. presidency, donations to the charity plunged by 37 percent.

Should that trend continue, it could put her and former President Bill Clinton’s so-called “charity” deep in the red — and eventually collapse the whole scheme.

In 2014, the organization cashed some pretty big checks, raising more than $3 million EVERY WEEK, or $172 million for the year.

In 2015, after Clinton quit, the group’s donors jumped ship. The total raised for the year fell to $108 million, according to new tax filings analyzed by The New York Post.

That’s not the end of the bad news for the Clintons: A Daily Caller reports find the foundation got only five new donors in the most recent quarter.

Five. That’s it. And if that shocking downward trend continues, it could lead to the entire Clinton Foundation unraveling.

The Clintons have claimed again and again that those who donate do so solely out of their hearts… and that every cent of the organization is dedicated to good works.

But if that were true, the money and donors would flow through thick and thin, whether family members were on the cusp of power or not.

Instead, as the going got tough… the donors got going! They were going elsewhere, and it looks like they’re still fleeing.

“I would expect there will be much greater difficulties in fundraising for the organization,” Leslie Lenkowsky, a professor with Lilly Family School of Philanthropy at Indiana University, told CNBC in an interview. “It’s just a fact of life that people in the public eye attract money for all sorts of reasons. Once they are not in the public eye, the money starts to dry up.”

It’s not just a matter of being in the public eye, of course. It’s a matter of trying to buy influence – something important to foreign governments such as Norway.

Last year, no doubt hoping to buy a spot as a favored nation in a Clinton White House, the Norwegians donated $25 million to the Clinton Foundation and $15 million the year before.

But they’ve already announced how much they plan to donate next year: $2.7 million, according to a local news report translated by PJ Media.

In fact, the Clinton Foundation’s days as a global power broker could ultimately suffer the same fate as Hillary’s presidential ambitions.

It seems that while EVERYONE wants to buy the influence of a possible president… NO ONE wants to fund the high-dollar lifestyle of a retired suburban New York housewife, which is what Hillary Clinton has suddenly become.