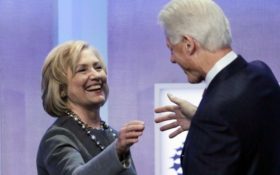 The Russia investigation took a stunning turn this week as it was revealed that the FBI had collected mountains of evidence pertaining to bribery, kickbacks, threats of extortion and even money laundering.

The news is so outrageous, it should have lead to an outcry of pressure for Attorney General Jeff Sessions to immediately indict former Secretary of State Hillary Clinton.

Instead… crickets. The reason you don’t hear much about this in the mainstream media, it’s for one reason.

This one has nothing to do with President Donald Trump… and EVERYTHING to do with former President Barack Obama.

Of course, it also has a clear link to Bill and Hillary Clinton.

Outraged U.S. lawmakers are already vowing multiple investigations into the explosive new report from The Hill, which revealed how the FBI had the goods on allegations that Russians had infiltrated both U.S. business and politics with the goal of expanding its control over the global industry.

The report finds that federal investigators had ample evidence as early as 2009 – when Obama was president, and Hillary Clinton was secretary of state.

“The Russians were compromising American contractors in the nuclear industry with kickbacks and extortion threats, all of which raised legitimate national security concerns. And none of that evidence got aired before the Obama administration made those decisions,” a source who worked on the case told The Hill.

That source was kept anonymous out of fear of retaliation… not only from Russia, but also American officials working furiously to keep this story under wraps.

“They also obtained an eyewitness account — backed by documents — indicating Russian nuclear officials had routed millions of dollars to the U.S. designed to benefit former President Bill Clinton’s charitable foundation during the time Secretary of State Hillary Clinton served on a government body that provided a favorable decision to Moscow, sources told The Hill.”

That body was the Committee on Foreign Investment in the United States, which at the time included Hillary Clinton as well as Eric Holder, who was Obama’s attorney general.

Despite the building case… despite the growing evidence… despite the cash being sent to Clinton’s charity… the committee unanimously approved the partial sale of Uranium One, a Canadian mining company, to Russia’s Rosatom.

Clinton has insisted that she had no role in the approval of the deal, which gave Russia control of more than 20 percent of the U.S. uranium supply.

But if this deal was really on the up-and-up, why would the Obama administration work so hard to keep all of this from not only the public, but also lawmakers in Congress who were outraged this week to learn the details?

“You want a real Russia collusion story?” Sean Hannity asked on Fox News on Tuesday night. “We’ve got it!”

As the investigation unfolded and as the sale was approved, former President Bill Clinton was busily accepting hundreds of thousands of dollars in speaking fees from Russian interests, according to Peter Schweitzer, author of “Clinton Cash.”

In addition, The Hill report notes that an FBI undercover informant witnessed conversations among Russian nuclear officials about trying to get close to the Clintons.

Did they succeed? The report suggests they may have found a back door into the family, with the Russian nuclear industry funneling millions to a U.S. entity that worked with the Clinton charity.

“If The Hill’s reporting is accurate, this is dirty money,” wrote Noah Rothman of Commentary. “Their report alleges that eyewitness and written accounts obtained by the FBI confirm that Russian officials were responsible for this influx of cash to the Clintons.”

In a second bombshell report – also from The Hill – an attorney for an unnamed FBI witness said her client tried to warn Congress… but was BLOCKED by the Obama administration’s Justice Department.

“All of the information about this corruption has not come out,” attorney Victoria Toensing told The Hill. “And so my client, the same part of my client that made him go into the FBI in the first place, says, ‘This is wrong. What should I do about it?’”

Toensing, who has worked for both the Senate Intelligence Committee and the Justice Department under President Ronald Reagan, is currently working to see if the Trump administration will allow her client to speak to lawmakers.

If and when that happens, expect C-SPAN to become the hottest network on TV — because an indictment may soon follow.