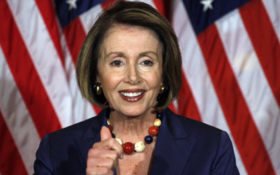 Nancy Pelosi just gave America a glimpse at her future plans — and it left critics scratching their heads.

Monday, Pelosi told CNN’s Christiane Amanpour she is “confident” she’ll retake her former position as House Majority Speaker in 2019… despite it being almost impossible.

In typical CNN fashion, Amanpour gushed with excitement during her interview with the California lawmaker. Amanpour praised Pelosi’s vision and called her a “trail blazer” that had achieved “incredible things” in her career.

Pelosi must have let CNN’s praise go straight to her head. She told Amanpour that Democrats would retake control of Congress… and would put her back in control.

“If Hillary Clinton had won and the Affordable Care Act was protected –I feel very proprietary about that– I was happy to go my way,” Pelosi said. “We didn’t know who would come forward, but that’s up to the caucus, they give me the honor of serving and it’s up to them to choose who comes next. But to have no woman at the table? To have the Affordable Care Act at risk? I said as long as [President Donald Trump] is here, I am here.”

So she promised Amanpour that after the election, “I will be the Speaker of the House.”

But is it possible?

So lets look at the facts:

Despite all this, Pelosi thinks she’s going to be re-elected as House Majority Speaker?

Either she’s a liar… or she’s lost her mind.

You can see the interview here —