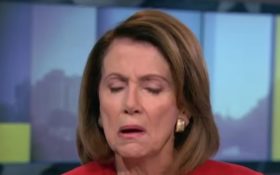 President Donald Trump has outmaneuvered House Minority Leader Nancy Pelosi so much that she believes she can’t beat him – and she may be starting to crack under the pressure.

Pelosi’s fragile mental state has been on display many times over, especially when she called the president by the wrong name.

Pelosi has called Trump by the name “Bush,” not once or twice, but repeatedly, in different contexts and interviews – over, and over, and over again.

It started shortly after Trump’s election, in February 2017, when she said she wanted to try to work with “President Bush.”

Two months later she told the ABC News program “This Week” that Trump was out-of-touch with voters – but she again called him “President Bush.”

She quickly apologized to the 43rd president. “I’m so sorry, President Bush,” she told host Jonathan Karl. “I never thought I’d pray for the day that you were president again.”

In another appearance, she got angry that “a lot of those people voted for George — for, what’s his name?” she asked the moderator.

Last July, she meant to tell her hometown Fox affiliate, KTVU-TV, that Trump was against Obamacare… but that’s not what she ended up saying.

“President Bush has come out against that, as you know, and it is not even a healthcare bill,” she said.

Of course, Trump is president and Obamacare is a healthcare bill….

One group counted at least five separate instances where Pelosi has bungled the name of the world’s most important political leader.

This February, she stumbled over the president’s name yet again, going into a confused ramble. This time, CBS News edited the video to make it look better.

So, calling someone by the wrong name is a sign that you were trying to remember something and got the wrong block – like pulling the wrong item off a shelf, according to a study published just before the 2016 election in the journal Memory and Cognition.

Evidently, Pelosi associates Trump and Bush together… as the enemy.

Still, some political experts like Dick Morris are daring to ask the question on everyone’s minds.

“Is Nancy Pelosi senile?” Morris asked in an online video.

After all, Pelosi doesn’t just mix up names – it’s everything she says, and it’s not new.

Four years later, she told Chris Wallace, “It’s almost a false argument to say we have a spending problem.” Well, except for that whole $21.4 trillion debt we’ve got going on.

Last year she opposed giving a permit for a prayer rally, saying, “The Constitution does not say that a person can yell wolf in a crowded theater.”

She once looked up from a speech she was giving to tell her audience she had just given “an applause line for you” – prompting the bored crowd to clap.

“When you look at her statements over the past couple of months, you’re driven to the conclusion that she really has begun to lose it,” Morris said.

Morris, a former advisor to President Bill Clinton, even gave the Democrats one last piece of free political advice: Dump Pelosi for good.

“Really, this woman is losing it,” he said. “The Democrat Party should not entrust their fortunes to a new-kid-on-the-block like Chuck Schumer and a senile old lady like Nancy Pelosi.”

“I think I’m worth the trouble,” she said. “I’m a master legislator. I am a strategic, politically astute leader.”