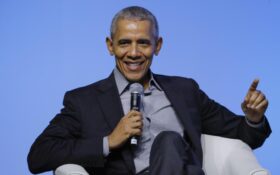 “The arc of history is slow, but it bends towards justice.”

That phrase, coined by Rev. Martin Luther King Jr., is one of Barack Obama’s favorite quotations. He loves the speaker, the eloquence, and the sentiment.

But there’s one thing he hates about it: He hates that he’s about to find out it’s true.

A scandal that Obama thought he had left dead and buried in the distant past has come roaring back to life — and to make matters worse for him, justice is about to be served in a foreign country.

A Mexican judge has handed down seven arrest warrants for figures connected to Obama’s Operation Fast and Furious scandal.

Fast and Furious dates back to the first years of Obama’s first term in office. From 2009 to 2011, the ATF trafficked (or “walked”) 2,000 guns from the United States into Mexico and let foreign criminals get ahold of them. The Obama administration claimed it wanted to track them and just “lost” them. Conservatives suspected that Obama wanted the guns to show up in deadly crimes in order to pressure Congress to pass tighter gun control laws.

Soon enough, he got his wish. Seven gang members shot Border Patrol agent Brian Terry in the back with AK-47 style weapons on December 14, 2010. Two of them came from Operation Fast and Furious, courtesy of the Obama administration.

Terry belonged to an elite tactical unit known as Border Patrol Tactical Unit, or BORTAC — something like a SWAT team on the southern border — and his death tipped off the public about Obama’s covert, cross-border gun-running activities.

Then, the media let it die. But now a Mexican judge is  looking for justice for Brian Terry.

On Sunday, the Mexican attorney general’s office announced that a judge handed down orders to arrest seven Mexican nationals tied to Obama’s Fast and Furious program.

The most famous name is Joaquín Guzmán, better known as “El Chapo, the drug pusher associated with the Mexican Sinaloa drug cartel. Only two of the other six names were released— Genaro García Luna, a former Public Security secretary, and Luis Cárdenas Palomin, the former head of intelligence for the National Police.

There’s one problem: All three of the men are already in prison — two of them in the USA. El Chapo is serving a life sentence, and he could be a big problem if he’s extradited since he has already escaped from Mexico’s toughest prisons… twice.

But if these three — or the other four people unnamed by the media — start to talk, it could frustrate Barack Obama’s decade-long effort to keep Americans from ever learning the details about his actions.

He and his cronies kept the scandal quiet all through the Obama administration.

Attorney General Eric Holder personally withheld documents from an investigation launched by congressional Republicans, according to those familiar with the details.

“Over the course of the investigation, the Justice Department has provided false information, stonewalled document requests, produced scores of blacked-out pages and duplicate documents in order to bolster its page count for public relations purposes, and refused to comply with two congressional subpoenas,” said then-House Oversight Committee Chairman Jason Chaffetz, who is now a fixture on Fox News.

Holder ended up being held in contempt of Congress. But it didn’t change a thing.

“Even after years of stonewalling,” complained Sen. Chuck Grassley, R-Iowa., in 2016, “President Obama continues to refuse to be transparent about” Fast and Furious.

Even after Obama left office, the Deep State has tried to keep a lid on the misbegotten Mexican gun operation. When El Chapo came to trial in 2018, the drug kingpin tried to tell the judge the details of the Obama-era program—but U.S. federal prosecutors silenced him in court.

So, what will happen if all of these seven witnesses—or any one of them—ends up in jail facing police officers, using Mexican interrogation tactics?

Will they open up under investigation? Will they try to cut a deal to get out of life in a Mexican prison? If so, who will they give up and what will we learn when they start to sing?

Or will Obama and his well-funded friends swoop into the Mexican justice system — which isn’t known for being above corruption — and pony up enough pesos to make sure the issue goes away for another 10 years?

One thing’s for sure: This isn’t how Barack Obama wanted history’s arc to bend.