Obama busted in “Fast and Furious” cover-up - The Horn News 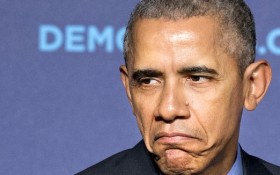 It’s one of the most outrageous examples of contempt for U.S. law ever seen — and it came straight from President Barack Obama’s administration.

Newly revealed documents released only after years of legal battles and a federal court order show that Obama’s Justice Department waged a campaign of disinformation, deliberately obstructing Congress as it attempted to investigate the “Fast and Furious” scandal.

That’s when federal agents allowed some 2,000 guns to be sold to Mexican drug cartels, hoping to track the weapons to drug lords — and then lost track of them.

Instead, the weapons were used in a string of horrific crimes in Mexico — and here in the United States, two of the firearms were found at the scene were U.S. Border Patrol agent Brian Terry was murdered by drug traffickers.

One “Fast and Furious” weapon was even found in the hideout of El Chapo, the notorious Mexican drug kingpin.

Now, the 20,500 pages of newly released Justice Department documents show the federal government waged another kind of war here at home. And their war wasn’t against gun-runners and drug-traffickers — but against Congress and, by extension, the American people.

Instead of cooperating with lawmakers as they engaged in their constitutional duty of oversight over the Executive Branch, federal officials conspired to keep Congress in the dark as much as possible and as long as possible.

“Over the course of the investigation, the Justice Department has provided false information, stonewalled document requests, produced scores of blacked-out pages and duplicate documents in order to bolster its page count for public relations purposes, and refused to comply with two congressional subpoenas,” House Oversight Committee Chairman Jason Chaffetz said in a news release.

The new documents show that even as the Obama Administration was accusing Congress of politicizing the investigation, the Justice Department itself was playing politics — and the obstruction went right to the top.

Senior Department officials, including then-Attorney General Eric Holder, “intensely followed and managed an effort to carefully limit and obstruct the information produced to Congress,” according to Chaffetz.

In one of the documents that feds have desperately tried to keep hidden, Holder revealed all too well what the department’s strategy would be.

“Ok- but everyone get ready- this isn’t about facts,” he wrote to his senior staff, according to a summary of the documents released by Chaffetz.

At another point, a department official drafted a letter to lawmakers promising to cooperate.

It was quickly edited.

“I’d stay away from the representation that we’ll fully cooperate in the future,” Department official Faith Burton wrote, and removed the language from the letter to lawmakers.

It was a rare bit of honesty, as the department of course didn’t cooperate. Not fully… not even a little.

The House ultimately voted to hold Holder in contempt of Congress for blocking the investigation. President Barack Obama also stepped in, declaring that the documents were protected from Congress by “executive privilege.”

A federal judge disagreed, and now some have been released to the public — and they only scratch the surface of what really happened, because the Administration is still holding thousands of other pages of documents with critical information about what really happened.

“Given that even after years of stonewalling these are only a fraction of the documents that were subpoenaed by the House of Representatives, at this point, the usefulness remains to be seen,” Sen. Chuck Grassley (R-Iowa), head of the Judiciary Committee, said in a statement, according to The Hill. “I look forward to seeing what was actually produced, and what President Obama continues to refuse to be transparent about. It shouldn’t have taken a lengthy court battle to get this far. The rest of the documents should be turned over so that the litigation can end and the American people can know the whole truth.”