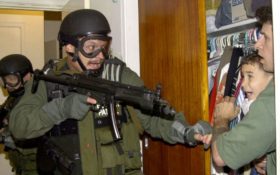 Donald Trump got elected president in 2016 by promising to be the opposite of the last four presidents—and his latest move just proved how different he is.

In a major new action, Donald Trump is using the same elite forces that Democratic Presidents Barack Obama and Bill Clinton once used — but reversing their roles.

As part of 45th president’s commitment to border security, the White House has announced it will send  “elite tactical agents” to arrest criminal aliens holed up in sanctuary cities and states.

It’s a complete reversal of their usage under the Clinton administration, when they were famously ordered by former Attorney General Janet Reno to take a young Elian Gonzaelz from his family in Florida.

These highly trained agents belong to the Border Patrol Tactical Unit, or BORTAC, the equivalent of a SWAT team.

About 50 BORTAC agents will join understaffed immigration officials to arrest illegal immigrants who are already in jail for serious crimes, but who were lucky enough to get busted in liberal “sanctuary cities,” where liberal politicians block police officers from handing the criminals over for deportation.

“When sanctuary cities release these criminals back to the street, it increases the occurrence of preventable crimes, and more importantly, preventable victims.” said Acting ICE Director Matthew Albence.

Since local governments refuse to hand the criminals over when they’re released, federal agents will hit the streets of leftist-run cities and states where the potentially heavily armed criminals are hiding, like Houston, Detroit, Chicago, and the whole state of California.

Even this strong enforcement action faces sabotage. In many cases BORTAC agents are blocked from entering illegals’ homes, so mayors and local officials are tipping off illegals when they see immigration officials—and telling criminals not to leave the house until the agents are gone.

But Democratic presidents have used BORTAC agents in their policies—just for much different aims.

Former President Barack Obama faced bracing criticism when his gun-walking program, known as “Operation Fast and Furious,” resulted in the murder of Brian Terry, a BORTAC agent and an Iraq War veteran.

Seven gang members shot Terry in the back with AK-47 style weapons on December 14, 2010.

The murder exposed the Obama administration’s “gun-walking” program, which let known cartel members smuggle weapons into Mexico—because the weapons used in Terry’s murder were part of the program.

One of Terry’s killers, Heraclio Osorio-Arellanes, was just sentenced to life in prison last month. He complained at the trial, “I feel like my rights are being violated as well.” Another gang member still hasn’t faced trial, almost a decade after the murder.

The whole world noticed when agents found then-five-year-old Elian Gonzalez floating in the waters off the coast of Florida, clinging to an inner tube, on Thanksgiving Day 1999.

His mother, Elizabeth, died during their attempt to gain freedom in the United States.

Elian stayed with relatives in Miami until June 2000—when Bill Clinton sent BORTAC agents in an overnight raid on the home to kidnap the child and send him back to Cuba.

The picture of a paramilitary BORTAC agent aiming a machine gun at a screaming six-year-old child, hiding in a closet, became seared into the mind of everyone who saw it.

Elian was repatriated to Cuba and given such extensive brainwashing that he came to see Fidel Castro as his “father.”

Elian told the Cuban Communist publication Granma in 2015 that he is a normal person, but “I am also involved with the work of the revolution.”

In 2016, Elian graduated from a Cuban military institute and said he planned to join the military.

Democrats use BORTAC agents to build up foreign militaries or criminal gangs that could kill Americans.

In a major reversal, Trump will use BORTAC to deport criminal aliens.

Mainstream media reporters have already signaled how they will spin the action to hurt President Trump during an election year.

Caitlin Dickerson, the national immigration reporter for the New York Times, told PBS she will ignore stories of dangerous criminals busted by the crackdown.

“The thing that we want to pay attention to as well as reporters, are the collateral arrests, which are becoming more and more common. So that’s where essentially someone’s in the wrong place at the wrong time, right?” she said.

The Horn News readers know that Donald Trump is reversing decades of weak, appeasement-based policies followed by his predecessors and striking a strong stance that demands the respect of gangs, human smugglers, and international crime syndicates alike.

The polls show his America First stance for border security will probably win the respect of American voters this November, too.