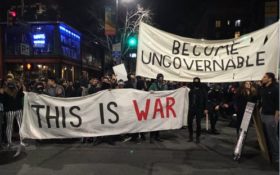 Reports say Kendrex J. White calmly stalked students at the University of Texas campus and slashed those he caught with a huge bowie knife Monday, killing one and seriously injuring four others, in an apparently random attack.

But there’s something the mainstream media won’t tell you about this horrific slashing spree.

It wasn’t random at all, critics say.

It appears to have been launched by a liberal U.S. terror group that calls themselves “Black Bloc” — and critics allege the attack was motivated by racism towards white students and a hatred of fraternities.

According to multiple reports, White targeted members of fraternities during his alleged rampage. One student told AOL.com the victims “were supposedly stabbed for wearing Greek letters.”

The gruesome attack followed a two-week spree of anti-fraternity vandalism at UT, where messages such as “racist,” “rapist,” and “kill frat boys” were spray painted on Greek houses.

Responsibility for the graffiti threats was claimed by a radical liberal terrorist group that calls themselves “Black Bloc” or “Antifa” (for Anti-Facist).

This is the same radical liberal group that claimed responsibility for the Inauguration Day riots in Washington, D.C., plotted an acid attack on Trump supporters, were behind the vicious assaults on elderly protesters in Berkeley, California, as well as numerous other instances of mob violence since President Donald Trump was elected.

So far in 2017, the liberal group’s war against free speech has cost taxpayers tens of millions in damage — and they’re just getting started.

The group claimed credit for the UT vandalism on their anonymous website called, “It’s Going Down” on Apr. 21st, where they warned they had violent plans for fraternities at UT over their “Greco-Roman legacy” that inspired “European civilization”.

“To the fraternities and University: Prepare yourselves. We are at your gates. Your walls will fall. And you will be sacked,” the group’s statement said.

The date of the deadly knife attack — May 1st — is no surprise either, say critics.

Far-left organizations on campus had encouraged members to engage for violent action on May Day, an international day celebration for anarchists and communists.

If you are planning on legal observing at #MayDay, please see the email from Cassie to sign up & complete the confidentiality agreement!! pic.twitter.com/96UfCXEMep

It doesn’t stop at violence, either.

This domestic terror group is targeting children as well as adults.

The Daily Caller reports “By Any Means Necessary”, the non-profit group linked to the riots and the alleged inspiration for the UT knife attack, has “deep ties to pro-pedophilia advocates.”

It’s time for the Trump administration to act and arrest these radicals, before their reign of terror grows worse.

Below is video of the suspected UT attackers arrest —