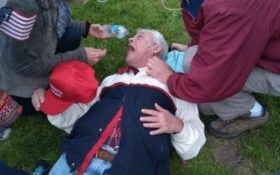 The attack on free speech has officially turned violent — and over the weekend, angry mobs targeted seniors.

When Donald Trump supporters decide to march at Berkeley, California Saturday in support of our nation’s president, angry liberals violently responded, physically attacking the marchers and stooping as low as attacking the elderly.

A total of 10 people were arrested for battery, assault with a deadly weapon, and resisting arrest. Police told marinij.com that authorities confiscated, “metal pipes, bats, 2x4s and pieces of wood. A group with bricks was detained, and their bricks confiscated.”

Multiple Trump supporters complained about the lack of intervention from police, who seemed to not want to get involved in the conflict.

But one hero stepped up when the police wouldn’t, and he couldn’t of been a better man for the job.

It was a professional cage fighter — and his presence turned the table on the rioters.

MMA fighter and UFC veteran Jake Shields had just finished dinner with his girlfriend in the area when he saw Trump supporter “covered in blood,” and being chased through the streets.

“There were hundreds of them around, with weapons, so I was trying to diffuse the situation with the least amount of effort possible,”Shields told MMA Junkie. “Generally, when you throw a punch, guys back off.”

After diving into the mob with a few decisive lefts and rights, the liberal mob turned tail and ran. Turns out fighting isn’t as fun when your target can punch back.

Shield described the horrific scene to Breitbart, “They came in trying to fight back, and I started backing off, but I helped grab the guy and shove him into a store,” he continued, “They were like, ‘he’s a Nazi too!’ but this other guy was like, ‘I don’t think he’s a Nazi,’ while I was still fighting people off. I was like, do you just get to choose who’s a Nazi and who’s not?”

When Shields asked the attackers why they had decided the man they were targeting was a Nazi, none of the remaining liberals had any idea.

“They were just mindless… It was really insane,” Shields said.

And he’s spot on. These liberal protesters seem to have no idea what they are even protesting about. One protester even argued against free speech, burning a sign with those words on it.

Social media users quickly noticed the irony, and compared it to an iconic image from Berkeley’s history.

Take a good darn look at these two photos. pic.twitter.com/jnIrCs29Mj