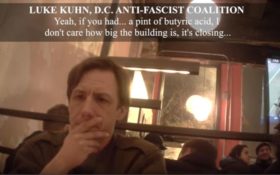 Approximately one million Americans are expected to descend on Washington, D.C. this Friday to honor President-elect Donald Trump’s inauguration. All across our nation’s capital, patriotic citizens are scheduling balls, parades and other merriment to celebrate the swearing-in ceremony of the 45th president of the United States.

But not everyone is happy — and far leftist groups have been exposed plotting to attack at least one pro-Trump ball with disruptive chemical agents.

The next day, shocking undercover video has exposed the groups plan to attack the inauguration ceremony itself.

Another shining example of the tolerant left in action.

The investigation was first conducted by journalist organization “Project Veritas”, part one of which is available below —

The liberal groups are caught discussing the use of “butyric acid” — a caustic agent that is used as a heavy-duty stink bomb — on the “Deploraball”, a celebration of grass-roots efforts being held at the National Press Club on Thursday to celebrate the efforts of “the passionate citizens who worked social media, knocked on doors, and endured harassment to support.”

The leftists are also caught planning to set off the sprinklers and assaulting any police officer that tries to keep the peace, and hint at bigger plans for the inauguration itself.

According to “Project Veritas” founder James O’Keefe, the threats were so serious — many of the plans included felony assault — his expose launched Secret Service and multiple felony FBI investigations before being released to the public.