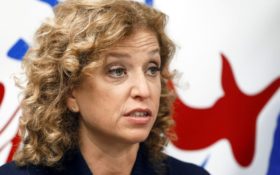 The kingpin of a massive spying scandal involving dozens of liberal Congressmen is set to enter a plea bargain in federal court – and Democrats on Capitol Hill are sweating that he may spill the beans on them.

Authorities say Imran Awan, a Pakistani native, and his wife will plead guilty to financial crimes on July 3 – but there’s much, much more to the story.

Experts believe prosecutors used the felony fraud case to hold Awan while investigators probe a far-reaching espionage plot that could rock the Democratic Party just before the midterm elections.

Politicians are squirming over the fact that Awan is one of five Pakistanis accused of illegally downloading classified information while working for House Democrats.

If the explosive allegations are true, it would mean that liberal Democrats used taxpayer funds to pay Pakistanis to spy on the United States – and Awan may just be ready to turn stool pigeon on the whole sordid affair.

Awan, and his two brothers Abid and Jamal, along with two of their wives Hina Alvi and Natalia Sova began working as IT aides for House Democrats… and their biggest supporter was Democratic Rep. Debbie Wasserman Schultz.

During much of this time, Schultz was chairwoman of the Democratic National Committee.

Not only did 44 House Democrats hire the Awans – but they didn’t run any background checks on the family.

The Awan family has collected $4 million at taxpayer expense since 2009, but they also made out like bandits with our national secrets.

The five had access to the House of Representatives’ IT server and could read every e-mail sent by members of the intelligence and foreign affairs committees.

Imran gained access to House Minority Leader Nancy Pelosi’s iPad – and all the secrets on it – with no oversight, according to documents tweeted out by Wikileaks Founder Julian Assange.

That’s when things got really murky: Capitol Police noticed the brothers saving copies of highly-classified material on their own private server, which they stored off-site!

Officials banned the family from the House network last February – but Schultz kept them on her payroll and gave them access to the Congressional server.

That might explain why she went ballistic against investigators as they closed in on the spies.

Schultz reportedly got in the face of House Chief Administrative Officer Phil Kiko and screamed that he was a “f—king Islamophobe.” Her office called the Awan investigation a case of “potential ethnic and religious profiling.”

Schultz’s actions blew up in her face when she got caught on video demanding that Capitol Police Chief Matthew Verdersoa turn over the seized computer at once or face “consequences.”

Last July, officers arrested Imran after he wired $283,000 to Pakistan and was about to board a plane to his native country.

Schultz blamed the Awan’s family legal woes on the “right-wing media circus fringe” and promised “you will not so much as take away their parking spots.”

Now there are signs that she or someone on the inside is trying to thwart the investigation.

The Capitol Police handed over information intended for the prosecution to the Awan family’s defense team.

The police say the mix-up was purely accidental – but federal agents smell a rat.

“I have never heard of anyone at the federal level inadvertently handing over documents to the defense en mass like this, never happens,” a former FBI agent told Judicial Watch.

Another sticky detail is the fact that Schultz’s own brother works in the Justice Department office investigating the affair and even tweeted about the “non-case against Debbie Wasserman Schultz.”

“The effort to bury, constrain and minimize the Awan case is deeply disturbing,” said Chris Farrell, Judicial Watch’s Director of Investigations and Research.

He demanded “a legitimate, full investigation by a competent law enforcement agency with substantial experience in counterintelligence and cyber-crime arenas.”

But if Imran and his wife want to avoid being squeezed over their banking crimes, they may tell federal investigators how their family pilfered top-secret information – and which members of Congress gave them carte blanche to do it.

Schulz may be freaking out because she feels the noose tightening on her.

We will continue to follow this monumental story. Until the next update, check out previous in-depth coverage by The Horn News: