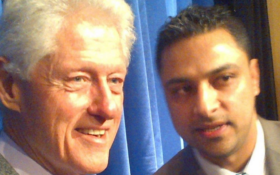 A major arrest Tuesday threatens to expose dozens of Democratic politicians’ links to an alleged spy ring — one rumored to be connected to the Muslim Brotherhood.

These aren’t small-time liberal politicians, either. This list includes a “who’s who” of top Democratic House Representatives – and it could lead all the way to Hillary Clinton.

Last night, officials arrested Imran Awan, the former head of IT for many House Democrats, on a technical charge of bank fraud — but the real scandal is much uglier and deeper than that.

According to his arrest records, Awan told the Congressional Federal Credit Union that he needed to borrow $165,000 for a home mortgage. Instead, he’s accused of using the money for a rental property, which is against the law.

The cops nabbed him as he was about to board a plane for Pakistan. He had just wired $283,000 to the country from his Congressional credit union account.

But arresting Awan for bank fraud is like getting Al Capone for tax evasion. There’s a much more nasty, and dangerous, story waiting to break – and it threatens to take down major players in the Democratic Party.

A slew of high-powered Democratic congressmen gave Awan and his family access to our most precious national secrets during the middle of the War on Terror. Now, it seems, they’re desperate to cover their tracks.

The Horn News has previously reported that Debbie Wasserman Schultz and several Democratic officials hired the Awan family as their IT administrators. Former congressman Bob Wexler hired Imran Awan in 2004. A year later, Wasserman Schultz put Awan on her payroll.

Soon, his whole family and two of their friends were making hundreds of thousands a year on the taxpayers’ dime, working for Democrats with direct access to state secrets.

In all, the Pakistani family worked for more than 25 Democrats in the House. For some reason, only far-left Democrats thought that giving this family and their friends – who allegedly have ties to the Muslim Brotherhood — access to the House IT server, all their e-mail records, and passwords to their personal laptops was a good idea.

The Awan family made out like bandits, raking in more than $4 million in taxpayer money since 2009. They also took six-figures from an Iraqi politician during this time.

But they may have made off with something far more valuable: Classified U.S. intelligence.

Their job gave them had access to the House of Representatives’ IT server for more than a decade. That means they could read every single e-mail sent by congressmen who belonged to the intelligence and foreign affairs committees.

Then the Capitol Police noticed something fishy. The Awans and their buddies began downloading these materials onto a private server, located off-site.

Once President Donald Trump took office, things took a quick turn. The police kicked them off the server in February, seized their equipment, launched a criminal investigation, and called in the FBI for back-up.

But the FBI did something shocking — they smashed the hard drives with hammers.

The Daily Caller reports that the feds admitted they physically obliterated the evidence, even though there is an ongoing investigation.

A Marine veteran who rented Awan’s house said he found “hard drives that look like they (the Awan family) tried to destroy.”

The FBI, it seems, finished the job for these alleged spies – and the Democrats.

It’s obvious why the left-wing, Trump-hating Democrats would want to sweep this under the rug. The Awan family worked for leftist Democrats who regularly dealt with the most classified information – including Jackie Speier of California, Andre Carson of Indiana, Joaquín Castro of Texas, and Ted Lieu of California.

Someone even snapped a picture of Imran speaking privately with former President Bill Clinton.

Imagine the backlash if the American people found out that Democrats were so careless that they handed classified information over to spies during the height of the War on Terror – when we were hunting for Osama bin Laden in Pakistan!

All of these Democrats have a lot to lose if it turns out they aided and abetted radical Islamic espionage. But no one looks as guilty as Hillary Clinton’s crony Debbie Wasserman Schultz, who was the head of the Democratic Party at the time this happened.

Most of the Democrats fired the Awan family in February when the investigation went public. But not Wasserman Schultz. She kept Imran on her staff – and payroll — until the time of his arrest on Tuesday.

Worse, Wasserman Schultz been lashing out like a little girl about to be sent to her room for a long, long time.

For example, she earlier this year she threatened the Capitol Police chief with “consequences” if he did not hand over a seized computer.

In May, Schultz got in the face of Capitol Police Chief Matthew Verdersoa, demanding he hand over Awans’ seized computer at once, despite the ongoing investigation.

The chief stood his ground, even though Schultz sits on the committee that determines the Capitol Police’s budget.

“You should expect that there will be consequences,” she told him in the explosive video footage.

Why would she be so concerned about its contents? And why did she keep taxpayer dollars flowing to Awan when she knew the cops were on to him?

Critics say it’s because he had the password to the iPad Schultz used when she was rigging the Democratic primaries for Hillary Clinton.

Was Awan blackmailing her?

What other dirt does he and his family have on left-wing Democrats?

Does he have leverage over Hillary Clinton herself?

We know Hillary did everything she could to hide evidence of her series of unethical and/or illegal actions. She deleted thousands of classified e-mails she sent from her private homebrew server, smashing her devices, and zapped the hard drives with BleachBit before turning them over to investigators.

Of course, Capitol Police aren’t the only people threatened with “consequences” for exposing a potential spy case.

Imran Awan’s stepmother told authorities that Imran threatened to have her family members in Pakistan kidnapped if she breathed a word about his actions to federal investigators.

Americans need to know what he had, or has, on powerful Democratic lawmakers and the Clinton family – provided that Obama-loyalists in the FBI haven’t already smashed all the evidence.