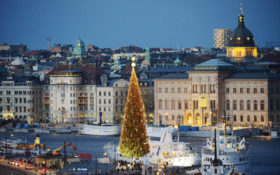 It’s only early November, but it’s beginning to look a lot like Christmas already. All across the Western hemisphere, lights, trees and decorations are starting to go up in many places.

Her plan to bring in millions of poorly vetted immigrants from terror hotspots such as Syria could change the fabric of the nation.

If you want to see how quickly it can happen, just look to Europe.

Reports out of Sweden indicate that it’s lights out for Christmas decorations as the nation grapples with a growing Muslim population after taking in more than 160,000 refugees in 2015 alone.

While many are no doubt thrilled to escape the violence of a war-torn land and appreciate their new homes, many others are doing just the opposite.

They’ve brought a wave a crime – including violent attacks and rape – and locals complain they also bring a complete intolerance for anything that doesn’t match their strict belief in Islamic law.

Christmas definitely doesn’t fit in with those beliefs, so the Swedish government is banning the traditional Christmas lights from being put up on public electric poles.

Of course, the Swedish government can’t admit they have a huge problem on their hands.

Just like the U.S. government, political correctness has them terrified – so they claim this sudden decision to end the country’s popular tradition that goes back many years is about safety standards.

The Swedish Transport Administration (Trafikverket) told the Spesia website that the poles weren’t designed to handle the weight of the lights.

The agency has also suddenly turned into the Grinch over sharing a little electrical power in the name of Christmas.

“We look at this because we do not have the right to allow others to take electricity from our facility according to electricity law,” Trafikverket told SVT.

“Everyone I’ve talked to are distressed over this,” Bengt Palmquist, Chairman of the community association in Hestra, told SVT. “I think it is a blow to the small communities.”

Indeed, in Sweden the Christmas lights are no small affair. They’re often strung over streets in elaborate displays – and encourage public gatherings as well as shopping – but not this year.

Sadly, the attack on Christmas lights is mild compared to some of the other types of attacks they’ve faced.

Earlier this year, Syrian Christians who sought asylum in Sweden were forced out of their homes and made to hide their crosses by Muslim migrants, who banned the Christians from the communal areas.

Last year, a Swedish bishop even suggested removing crosses from a church to make it “more inviting” to non-Christian visitors.

Elsewhere in Europe, there have been reports of crime waves… include sexual assaults… committed by Muslim migrants.

With more arriving every day, many European nations are worried about more than just Christmas.

They’re worried that they could lose their national identity.

And it may be coming to America next.