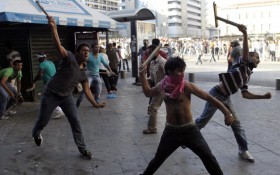 As Europe’s migrant crisis worsens, there’s an epidemic of racial and religious violence that’s coming with it — and it’s much worse than the media is reporting.

The conditions in these migrant camps are bad. Disorder, theft, the religious persecution of Christians, and riots over the lack of amenities are becoming a regular occurrence. According to one German top cop, much of the news is being intentionally suppressed to prevent panic.

The leader of the German Police Union, Rainer Wendt, warns of violence between migrant groups. Wendt went on to state that he believes information about the severity of violence involved in the migrant crises is being withheld by authorities to avoid scaring the public.

In the northern German city of Hamburg, about 200 Syrians and Afghanis clashed after an argument broke out over a shower line. The groups attacked each other with iron bars, rocks, and other weapons.

In another German asylum in Calden, an Albanian migrant cut a line, resulting in an argument with an older Pakistani man that escalated into a violent riot of about 300 migrants along racial lines.

In Slovenia, migrants were angry with the long wait and lack of amenities at the provided camp burned the tents and their clothes in protest to having to wait 24 hours in order to be transported to the Austrian border.

Much of the violence has also been directed toward the Christian minority.

In Sweden, Syrian Christians were forced out of their temporary home by angry Muslims with whom they shared the space. The Muslims demanded the Christians hide their crosses, and banned them from using the communal areas.

At another camp in Germany, a Muslims believer savagely beat a 24-year old Iranian refugee with a baton for allegedly converting to Christianity.

It could get much worse for these Christian migrants. According to reports that have come out of the camps, trained ISIS assassins are disguising themselves as migrants to infiltrate, kill and kidnap vulnerable Christians. Refugees are reportedly too terrified of retaliation to report these assassinations.