Migrants blamed for wave of sex attacks - The Horn News 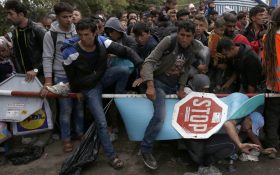 Conservatives warned that the huge influx of Muslim refugees into Western countries would come with dangerous consequences.

Now, it seems these concerns were justified.

In Sweden, two recent rock music festivals descended into a swarm of sex attacks — with young girls as young as 12 being targeted by groups of foreign youths.

“’Foreign young men’ were blamed by police for the attacks at one of the festivals and at least two unaccompanied migrant youths were under arrest,” according to The Telegraph.

Karlstad Police Inspector Leif Nystrom says they had received 32 reports of alleged assaults by boys or young men at the three-day event, Putte i Parken. He said the attacks included groping but there were no reports of rape. He would not offer official details.

Nystrom told The Associated Press on Tuesday that police have identified the perpetrators but that no one has yet had been detained. He declined to give more information about the cases or the identities of the suspects.

But others are speaking out. Swedish police officer Per-Arne Eriksson told The Express, “The girls said that a group of seven to eight young guys surround them. They groped their bottoms and breasts and forced their hands inside their cloths.”

Two underage migrants were arrested in connection to the sex attacks – but have since been released.

Mr Eriksson added: “The two suspects belong to the group of unaccompanied refugee children. They were released because of their young age and sent back to their accommodation. They are under 18 years old.”

This is an increasingly common occurrence in the country where rape incidents are skyrocketing. Earlier this year, Swedish police faced allegations of a cover-up for failing to inform the public of widespread sexual assaults by migrants against teenage girls at a music festival in Stockholm 2015.

— The Horn editorial team and The Associated Press contributed to this article.