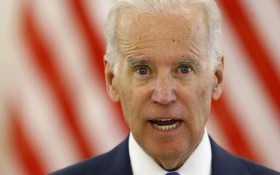 Democrats seem willing to say anything to help President Barack Obama appoint a new Supreme Court justice during his last year in office.

Even if it’s hypocritical.

Many members of Congress, and all the current GOP candidates for president, want Obama to hold off on naming a replacement for former Justice Antonin Scalia, who died earlier this month. With an election looming, the argument is that Obama’s successor should appoint the next Supreme Court justice.

And while many Democrats say Obama is well within his rights to name a replacement now, they didn’t always feel that way when there was a Republican in the Oval Office. Here’s how five top Democrats, including Obama, are flip-flopping on the issue.

“We will institute the Thurmond Rule, yes,” said former Judiciary Committee Chairman Leahy at Georgetown University in December 2006. He was referring to the unofficial principle that judicial nominees shouldn’t be confirmed in the lead-up to an election.

Ten years later, Leahy told CNN that “There is no such thing as the Thurmond Rule,” the day after Scalia’s death.

As Senate Judiciary Committee chairman more than two decades ago, the vice president argued that President George H.W. Bush should wait until after the November election to name a nominee.

In the remarks, Biden said that a temporarily depleted court was small price to pay for avoiding a “bitter fight” that would assuredly damage the nominee, the Senate and the court, “no matter how good a person is nominated by the president.”

“President Bush should consider following the practice of a majority of his predecessors and not — and not — name a nominee until after the November election is completed. … Once the political season is underway, and it is, action on a Supreme Court nomination must be put off until after the election campaign is over.”

Sen. Joe Biden in 1992 says President Bush should “not name a nominee until after the November election…” #SCOTUShttps://t.co/setQGLzePt

“Nowhere in (the Constitution) does it say the Senate has a duty to give presidential appointees a vote. It says appointments shall be made with the advice and consent of the Senate. That is very different than saying every nominee receives a vote,” Senate Democratic leader Reid said on the Senate floor in 2005.

In a statement released following Scalia’s death, Reid said, “Failing to fill this vacancy would be a shameful abdication of one of the Senate’s most essential constitutional responsibilities.”

“Given the track record of this president and the experience of obfuscation at the hearings, with respect to the Supreme Court, at least, I will recommend to my colleagues that we should not confirm a Supreme Court nominee except in extraordinary circumstances,” said Schumer in a 2007 speech.

“Whether Republicans agree or not with my evaluation of whichever candidate the president puts forward, they have a constitutional obligation to hold hearings, conduct a full confirmation process and vote on the nominee based on his or her merits,” said Schumer in a blog post last week.

“There are some who believe that the president, having won the election, should have complete authority to appoint his nominee … (and) there should be no further question as to whether the judge should be confirmed. I disagree with this view,” said then-Sen. Obama in January 2006, the same year he joined a filibuster against Justice Samuel Alito’s confirmation.

Now? “There’s been a basic consensus, a basic understanding, that the Supreme Court is different. And each caucus may decide who’s going to vote where and what but that basically you let the vote come up,” said Obama at a news conference last week.