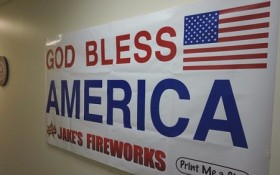 The anti-Christian Freedom From Religion Foundation (FFRF) was on the prowl again recently. Their target — the city of Pittsburg, Kansas, where they forced the removal of a 15-year-old God Bless America banner that was put up in the post office after the September 11th attacks.

Upset by the ban, a local company quickly mobilized to fight back. Though the town was forced to remove the one banner in the post office, citizens and local politicians replaced it… with 1,500 more.

Local company Jake’s Fireworks announced days after the ‘God Bless America’ banner was taken down that it was planning to print and distribute – for free – 1,200 lawn signs and 300 similar banners.

Local residents responded cheerfully, grabbing up every single banner and sign for display around town within an hour

Vehicles lined up as far as the eye can see to pick up a free “God Bless America” banner @ @jakesfireworks pic.twitter.com/Ips4uu0NAW

Among the first in line were local legislators Sen. Jake LaTurner, (R-Pittsburg), and Reps. Adam Lusker, (D-Frontenac), and Chuck Smith, (R-Pittsburg), who each grabbed a sign and then helped distribute the rest to local citizens.

“This is just the right thing to do,” Smith said. “Isn’t it just awesome that the people of Pittsburg feel this way?”

It took only 45 minutes for the community to claim each of the 1,500 signs, and after Jake’s employees diligently took down the contact information of anyone who missed out. The company has plans to continue to give out additional signs and banners as they are printed.